Home > Back to Search Results > Spain to support America in independence...
Click image to enlarge 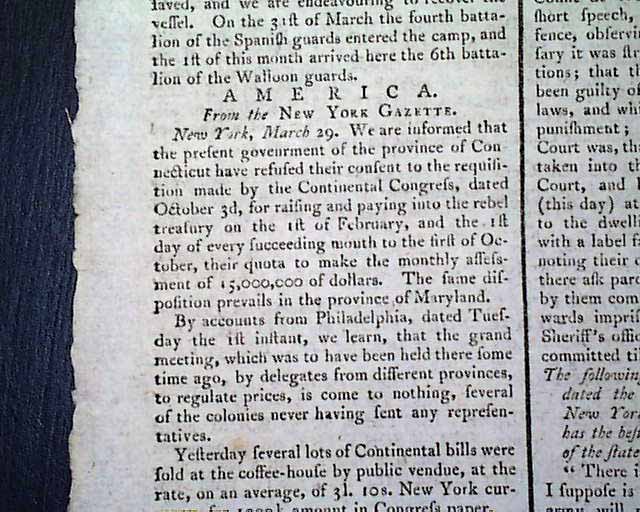 
THE GLASGOW MERCURY, Scotland, May 18, 1780  Page 2 has a report headed "America" with news from New York noting in part: "...present government of the province of Connecticut have refused their consent to the requisition made by the continental Congress...for raising & paying into the rebel treasury ...The same disposition prevails in the province of Maryland..." and a report from Annapolis as well (see). Another page has: "...that troops had not been sent out to Sir Henry Clinton time enough to enable him to carry a sufficient force before Charlestown without sending for a reinforcement to New York since his arrival at Charlestown..." with more (see). Near the back is: "...conduct of the Court of Spain, i entering into an alliance to support & abet American rebellion & independence...is the most absurd & unaccountable ever engaged in by any power upon earth; as it must inevitably, at last, bring on their own destruction in that part of the world...".
Eight pages, 9 by 12 inches, very nice condition with a pg. 2 red tax stamp.