Home > Back to Search Results > Confederates admit a defeat near Petersburg...
Click image to enlarge 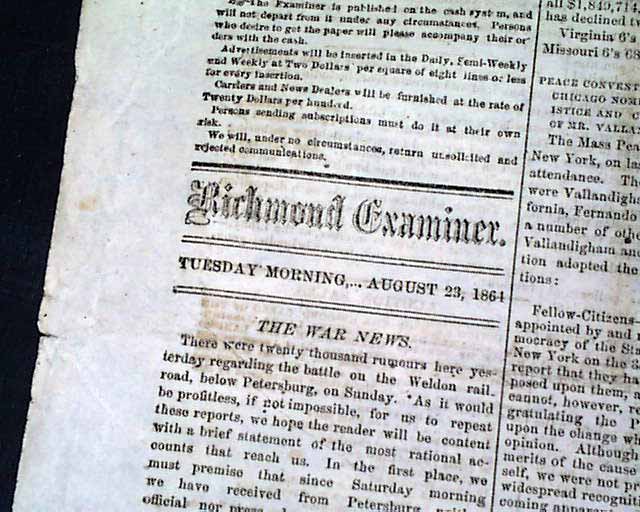 Confederates admit a defeat near Petersburg...

Not only a nice Confederate newspaper but one from the capital of the Confederacy. The front page has much on the Civil War with items headed: "The War News" which includes reports from various fields of operation; "Latest News From the North" "An Armistice Pressed at Washington" "From Grant's Army" "From Sherman's Army" "From the Valley" "The Steamer Tallahassee" "Guerrillas at Work in Kentucky" "Lincoln Makes a Speech to the Soldiers" which includes the text of it (see); "The Condition of Chambersburg" "Out of Fort Warren" "The Petersburg Court of Inquiry" "From Petersburg" and other items as well.
The back page features the always interesting editorial, this one offering some pessimism to the Confederate cause by beginning: "To congratulate our readers every morning upon some brilliant success of the Confederate arms would be, indeed, delightful, although monotonous. Unhappily such is not our privilege today. The fighting of Sunday south of Petersburg has gone against us..." with much more (see). The editor touches upon several other topics in his editorial which takes over two columns.
Also on the back page are: "From Petersburg--The Fight On the Weldon Railroad" "City Intelligence" "Seeing the Peace Commissioners" "The Courts" "Prisoners of War" and other items.
Complete as a single sheet newspaper with a one column masthead, typical late in the war as most paper mills were in the North. This issue is in very nice and clean condition.