Home > Back to Search Results > Death of Chairman Mao in a Beijing, China, newspaper...
Click image to enlarge 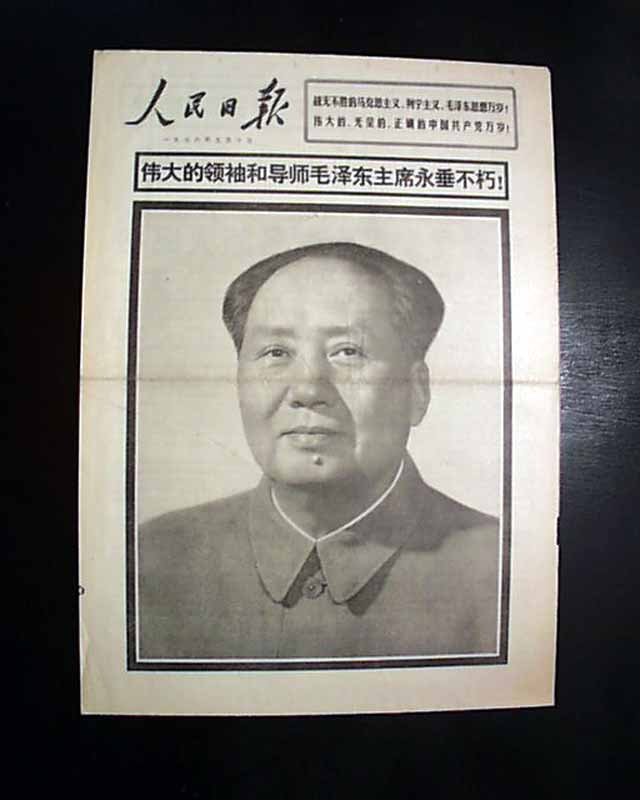 Death of Chairman Mao in a Beijing, China, newspaper...


PEOPLE'S DAILY, Peking (Beijing), China, Sept., 10, 1976  This is likely the most notable issue reporting the death of Chairman Mao Tse Tung (Zedong) of the People's Republic of China who died Sept. 9. The full front page is taken up with his black-bordered photo headed (in translation): "Eternal Glory To The Great Leader And Great Teacher Chairman Mao Tsetung!" Within the box at the upper right of the ftpg. is: "Long live invincible Marxism-Leninism--Mao Tsetung Thought!" and: "Long live the great, glorious and correct Communist Part of China!"
All of page 2 is devoted to the complete text of the death announcement, the black-bordered head at the top: "Mourning with deepest grief the passing away of the Great Leader and Great Teacher, Chairman Mao Tsetung."
Collectors prize notable events reported in newspaper from the city where the event happened. Mao died in Beijing.
Complete in 6 pages as is confirmed by another source. Minimal if any margin or fold wear, very nice condition.