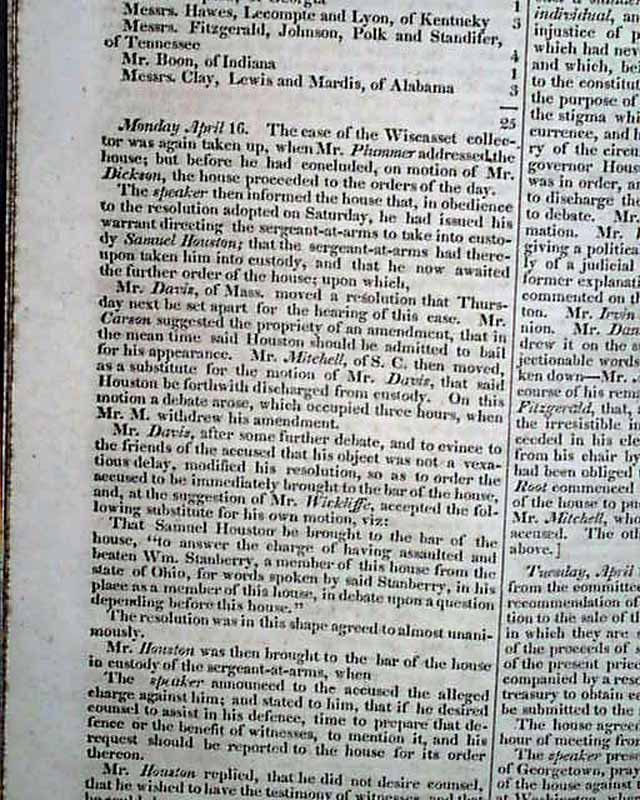 
NILES' WEEKLY REGISTER, Baltimore, April 21, 1832  The prime content in this issue is the report from Congress on the Sam Houston flogging case, where he was accused of beating a fellow Congressman, William Stanberry, because of comments made while in debate. Part of the discussion includes: "...Do you admit or deny that you assaulted & beat the said Stanberry, as he has represented in the letter which has been read, copy of which has been delivered to you by order of the house?...But if the said Samuel Houston deny the assault & beating, or that the same were done for the cause aforesaid, or refuse or evade answering the said interrogatories, then the said Wm. Stanberry shall be examined as a witness touching said charge...A committee shall be appointed to examine witnesses..." and more (see photos). The report of the following day appears on the following page, including in part: "...Mr. Stanberry was called upon to testify...the testimony was taken down...that it was no part of his intention to impute any fraud to governor Houston, his name had been introduced into his speech only to identify the transaction to which he had reference..." with more (see photos).