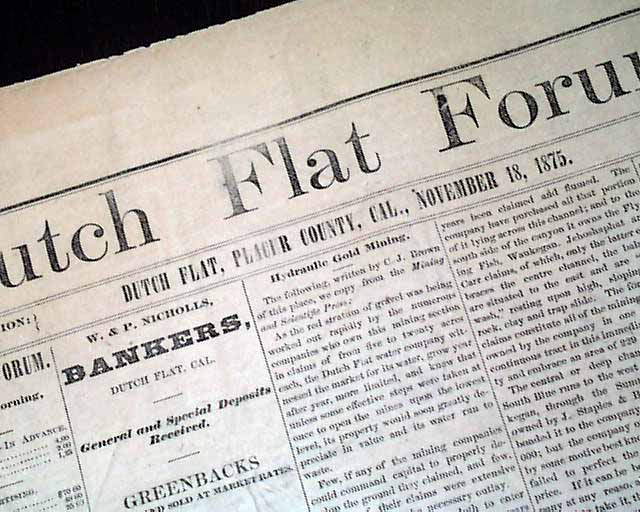 Dutch Flat is located mid-way between Sacramento and Lake Tahoe, near Interstate Highway 80. Famous for its hydraulic mines, from which many tons of gold were taken, for its lumber industry, its role in creating the Central Pacific Railroad, and for its large Chinese community, Dutch Flat remains one of the most charming towns in California.
This scarce newspaper from its heyday from the mining era is complete in 8 pages and contains a wide variety of news items and advertisements, many of the latter being illustrated and focused on those involved in the mining business--including plenty of saloon ads. On the front page is an article headed: "Hydraulic Gold Mining" and inside are: "Prison Life in the California Penitentiary at San Quentin" "Vanderbilt's Narrow Escape on a Lightening Train" "Wit & Humor" and more.
Eight pages, never bound nor trimmed, some archival mends within causing no loss, some edge tears, a news agent's stamp at the top, otherwise in good condition.