Home > Back to Search Results > Jefferson Davis proclaims a day of thanksgiving and prayer..
Click image to enlarge 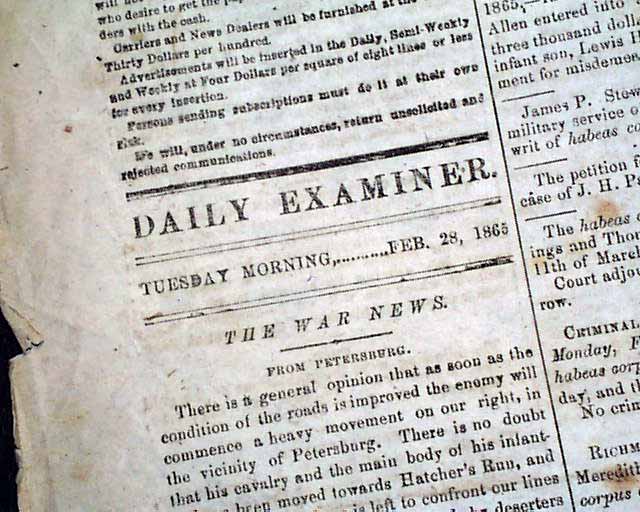 Jefferson Davis proclaims a day of thanksgiving and prayer..

Not only a Confederate newspaper, but one from the capital of the Confederacy. The front page has: "The War News" which mentions an expected siege upon Petersburg, and that: "...Grant probably designs another experiment upon our lines before Sherman can possibly get up to share in that fond conclusion--foregone in Yankee estimation--the capture of Richmond. That laurel, Grant is, no doubt, adventurously resolved to pluck for himself...". Other subheads include: "Destructive Fire in Columbia" "Yankee Cavalry in Northern Virginia" "Reorganization of Our Cavalry in the South West" "A Frightful Record--The Cells of Fort McHenry". There is also a near full column letter which tells of the desperate situation in several counties of Virginia.
The upper right of the front page has: "Proclamation by the President Appointing a Day of Fasting, Humiliation and Prayer with Thanksgiving" signed in type: Jefferson Davis. This proclamation includes: "...let us not forget to render unto His holy name the thanks and praise which are so justly due for His great goodness & for the many mercies which He has extended to us amid the trials and sufferings of (a) protracted & bloody war..." with much more (see photos). An interesting pronouncement from the Confederate President at a time when there was but little--of any--hope of success for their cause.
The back page has a lengthy editorial which seems focused on the financial crisis which is pending in the North (see for portions). There is also coverage of events in the: "Confederate States Congress", as well as: "Latest News From the North" which includes subheads: "Wilmington In Possession of the Yankees" "Sherman's "Army--Its Numbers" "From New Orleans & Mobile--Expedition Against Mobile" "Government in the Conquered Southern States" "A Jubilee Throughout Yankeedom" and more. Also: "Message of Governor Brown to the Legislature of Georgia" which includes: "...a defence of the state against the attacks of the press for permitting Sherman to march unmolested through the state...He claims that the golden opportunity was lost for overthrowing Sherman..." with more.
Complete as a single sheet newspaper with a one column masthead, which was typical from late in the war. Some light browning at folds and minor margin tears, generally nice.