Home > Back to Search Results > The Confederate version of "Harper's Weekly"...
Click image to enlarge 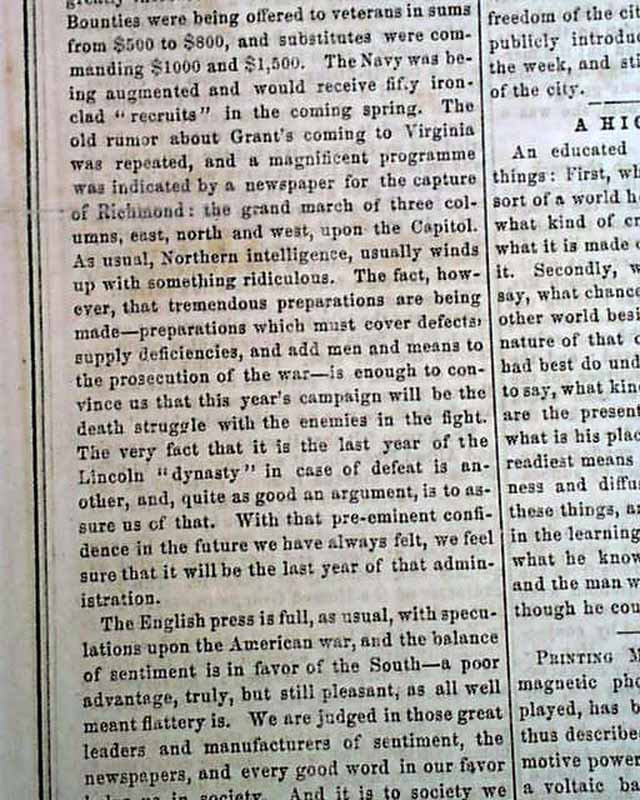 The Confederate version of "Harper's Weekly"...

The front page features a print of: "Brigadier-General E. L. Thomas" with a brief biography of  him as well (see). Inside includes a column-long editorial on the Civil War, including: "The interval of winter is not one of inactivity to the enemy. Though their guns are hushed, their tramp is ceased...the efforts of the Lincoln Cabinet & its stupendous clique are massing strength for the vernal onslaught..." with much more (see).
Begun on September 13, 1862 the "Southern Illustrated News" sought to fill the void left when the Southern States lost access to Harper’s Weekly and other illustrated newspapers from the North. In its “Salutatory,” in the first issue the editors state:  "...We propose to issue an Illustrated Family Newspaper…devoted to literature, to public instruction and amusement, to general news, and to the cause of our country in this trying hour when she is engaged in a terrible, but resolute and hopeful struggle for her liberty and independence..." Although it could be argued it never lived up to all of these goals as reports from the war were very limited, it was an important publication nonetheless. At its peak boasting as many subscribers as the largest daily paper in Richmond. As with all Southern publications it suffered from lack of supplies, reporters, artists and engravers as many had been drafted either into the military or into the service of the Confederate administration to engrave paper money and stamps. The engravings were crude when compared to Yankee publications.
Eight pages, a bit irregular at the spine, some discrete archival mends to interior margins, some dirtiness to pg. 4, generally nice condition.