Home > Back to Search Results > Philadelphia printing of the Constitution of the United States...
Click image to enlarge 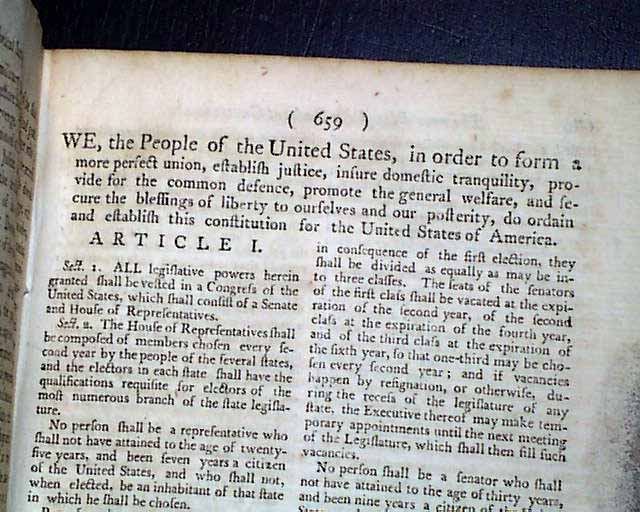 Philadelphia printing of the Constitution of the United States...

This title, along with the "American Museum", has the honor of being the first magazine to print the Constitution of the United States. Both publications were from Philadelphia, the city where the Constitution was created. Comments from the Library Company of Philadelphia note that it can not be definitively determined which of these two publications was the first to print, but rather: "...for all practical purposes they were simultaneous." Another source notes that this magazine was likely printed on Sept. 22 as the last internal date, on the last page, refers to an event that took place on the 17th as "Monday last". Mott in his "History of American Magazines" notes it was common practice to issue monthly publications by the last week of every month.
The Constitution appears in the back third of the issue, complete with the memorable Preamble which begins: "We, the people of the united states, in order to form a more perfect union..." and more (see). The Preamble is set in larger type than the rest of the Constitution and is in banner form without columns. This is followed by "Article I" and the balance of the Constitution, taking 6 pages. At its conclusion is the signatures in type of George Washington and other members of the Constitutional Convention, listed by state (see). This is then followed by two letters, each signed in type by the Convention President, George Washington, concerning the work of the Convention and the notice that it will be sent to the various states for ratification, etc. (see). The second letter begins: "We have now the honour to submit to the consideration of the united states in congress assembled, that constitution which has appeared to us the most advisable..." (see).
The title/contents page notes the Constitution, listed as: "The new plan for a Federal Government proposed by the Convention." with the page notation (see).
This issue also includes the text of John Quincy Adams's Harvard commencement address, this being his first published writing.
This issue is complete in 60 pages, disbound, measures 4 3/4 by 7 3/4 inches, with the full title/contents page. Still present is one of the two plates called for, plus half of the "Meteorological Observations" plate is present. Some foxing or discoloration in the margins but otherwise the issue is in very nice condition.
A very significant issue: the first (among two) magazine printing of the Constitution from the city where the document was created. And a far more attractive price than the $200,000+ auction record for the "Pa. Packet" newspaper which contained the Constitution.