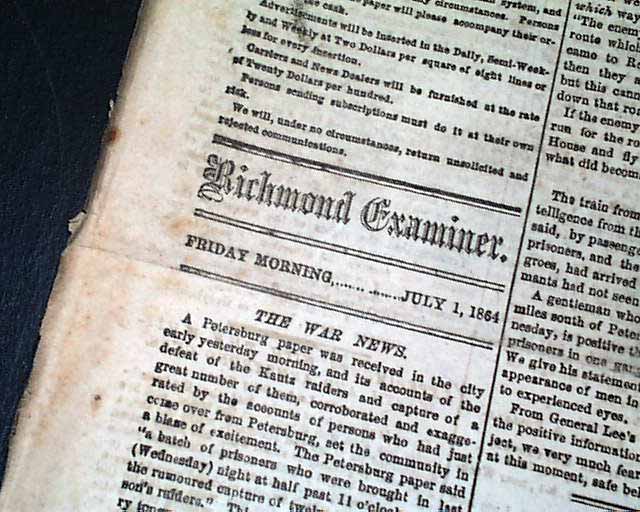 
THE RICHMOND EXAMINER, Virginia, July 1, 1864  Not just a Confederate newspaper, but one from the capital of the Confederacy. "The War News" which has various reports and also includes an introduction to a dispatch by Robert E. Lee, the intro including: "...the following official dispatch from General Lee, relative to the raiders was...posted...But for the forerunning insane tales screwed out of scared prisoners or begot of idle minds, it would have been received joyfully. This is the despatch:..." and what follows is the document signed in type: R. E. Lee, General (see).
Other small and larger heads on the front page include: "The Courts", "Confederate States District Court", "A Good Riddance" which notes: "Within the past 48 hours Richmond has been relieved of the presence of over 3000 Yankee prisoners. About a thousand remain...The number of Yankee wounded in hospital in Richmond is about 1200 but they are dying at a pretty rapid rate per day." Also: "The Battle at Nance's Shop", "The Second Virginia Cavalry In the Fights at Trevillian's and Nance's Shop", "The Situation at Petersburg", "From Petersburg" and a few other items.
The back page is noteworthy for the venomous editorial, aimed at U.S. Grant and his ambition to take Richmond. Portions begin: "On the fourth of this month General Grant has an appointment in Richmond...do not now think he is likely to keep his appointment...perhaps even the most of Grant's army--possibly even Grant himself, believes that...he will yet find himself with his army in possession of this capital on the appointed day. To keep his tryst he has thrown away the lives or limbs of about 150,000 men; that is nothing; he & his nation would deem those 1500 hecatombs well bestowed to win one mile of ground--for never was human life so imperially squandered by King or Kaiser as now by the 'Model Republic'...." and much more.
Also on the back page: "Latest News  From the North" with subheads including: "From Georgia", "From Petersburg", "Lincoln's Foreign Policy", "Running Away from the Draft", "The Propensity of the Yankees to Steal", "What Makes Up a Yankee Regiment" and a bit more. And also: "The Late Yankee Raid on the Danville Railroad" and "Experiments with the Whitworth & Armstrong Guns".
Complete as a single sheet newspaper with a full banner masthead, never bound nor trimmed so with wide margins, very nice condition. 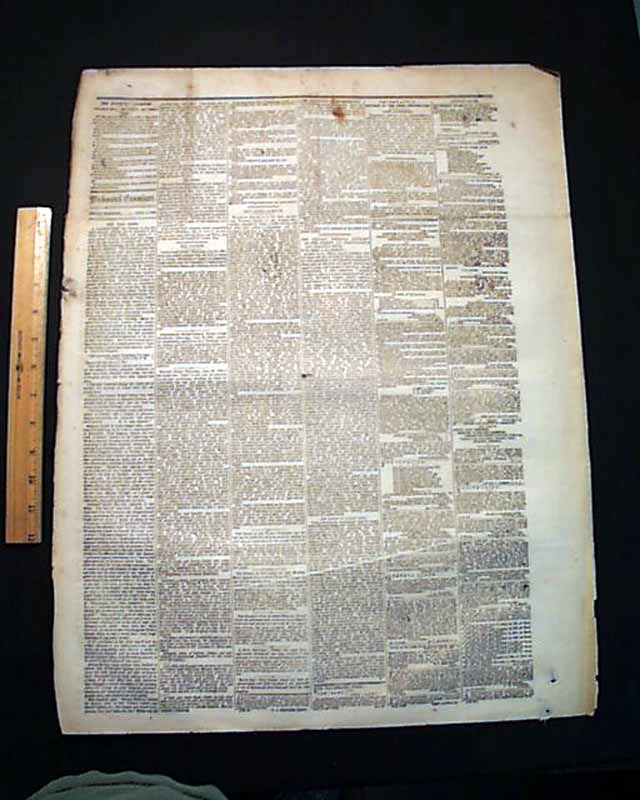 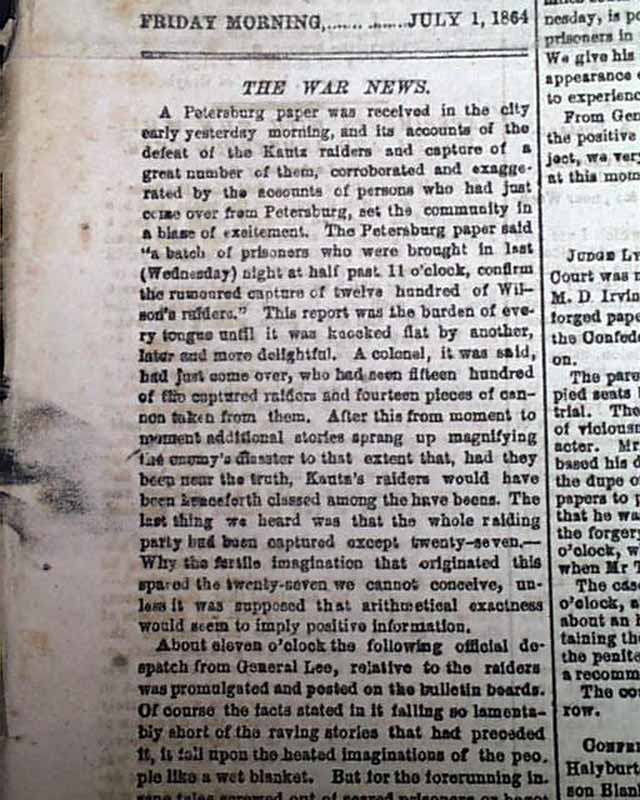 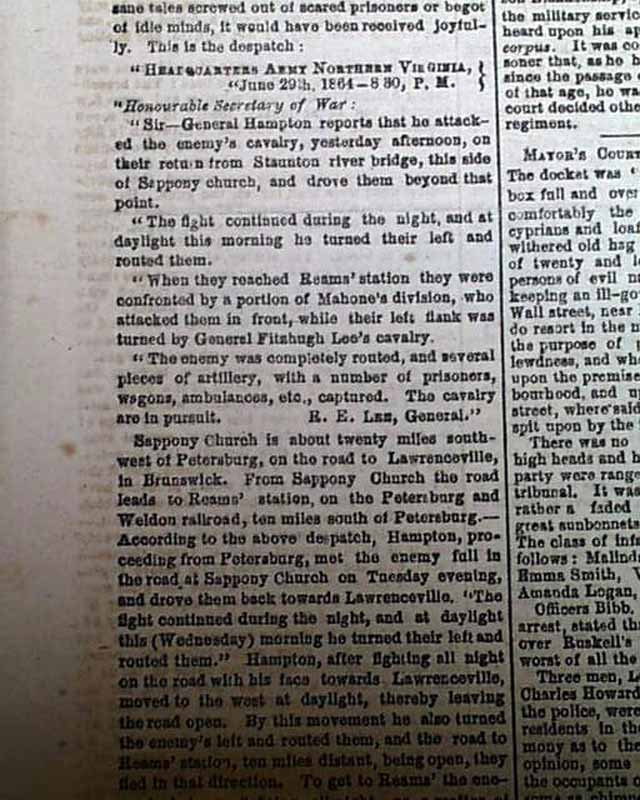 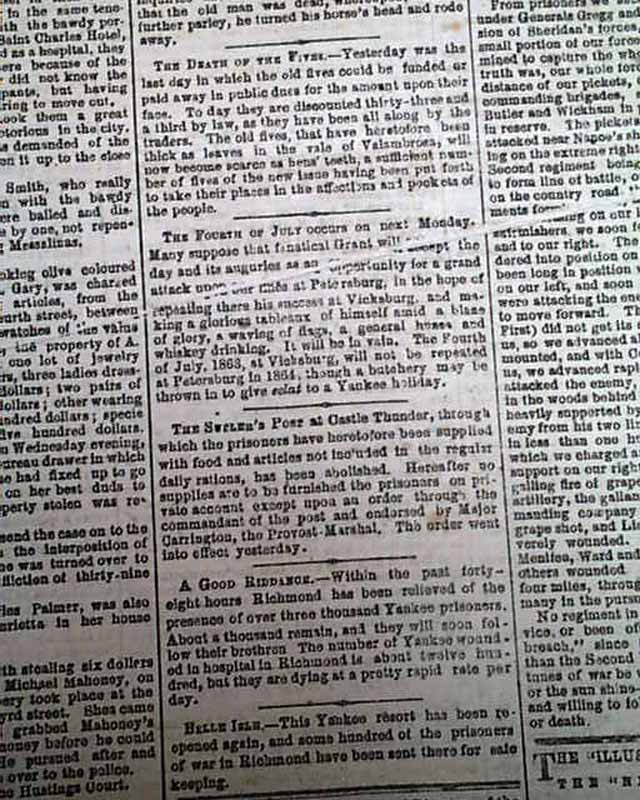 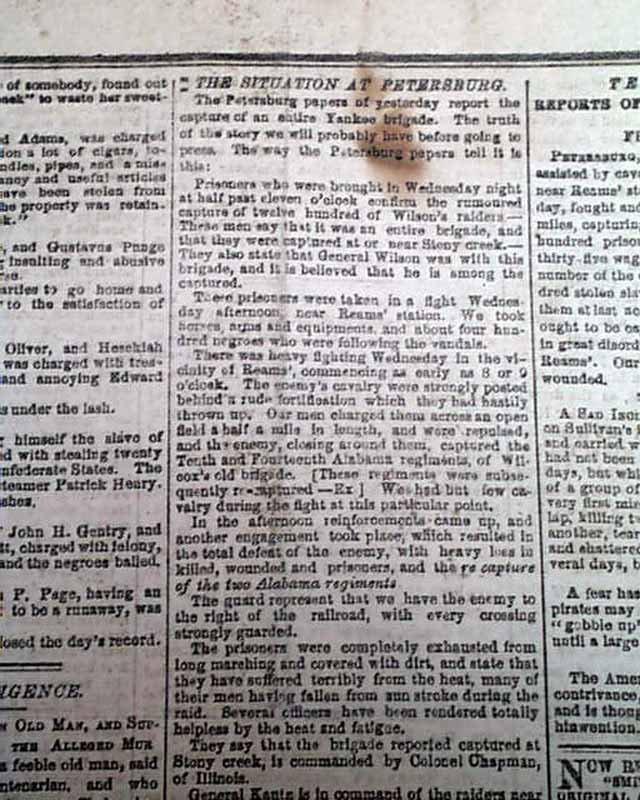 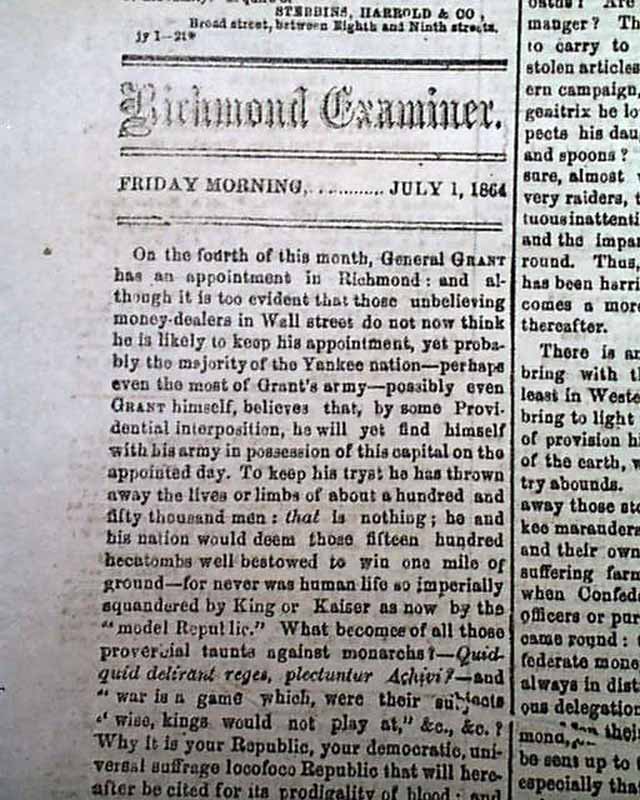 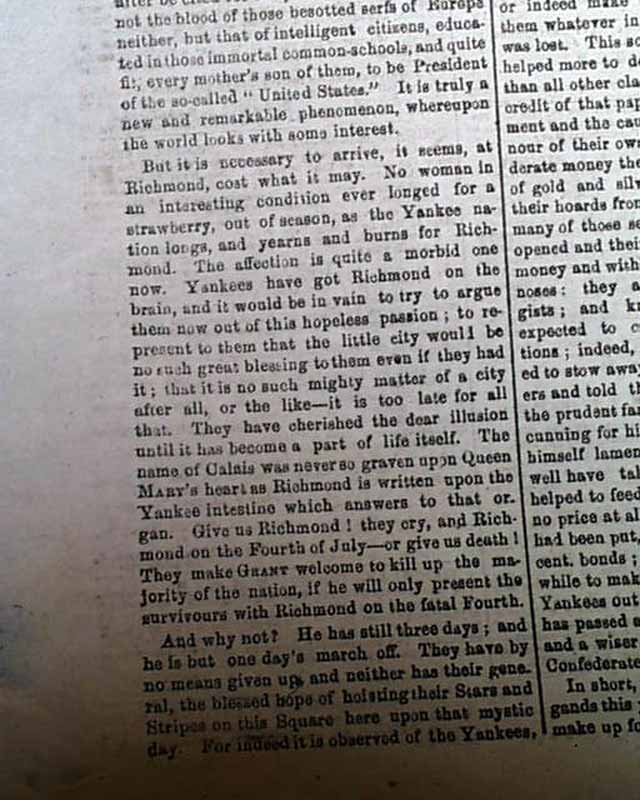 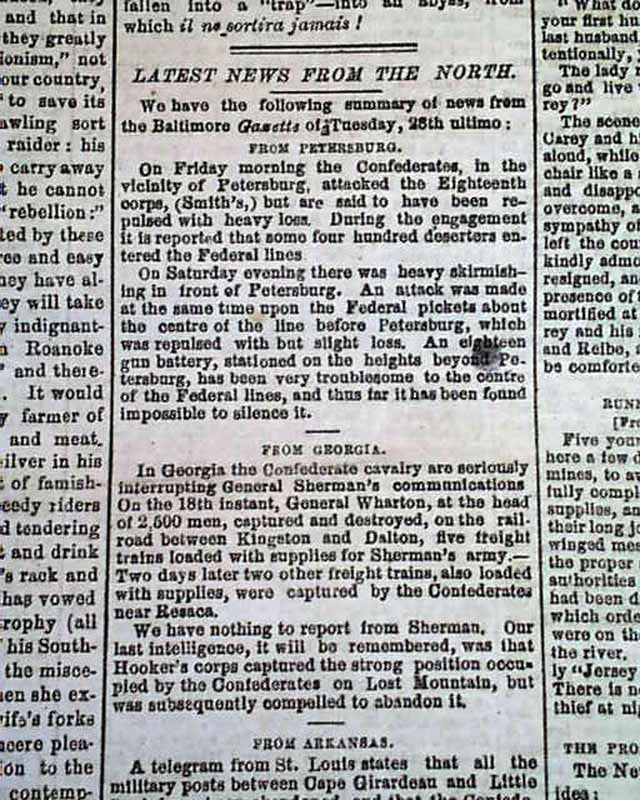 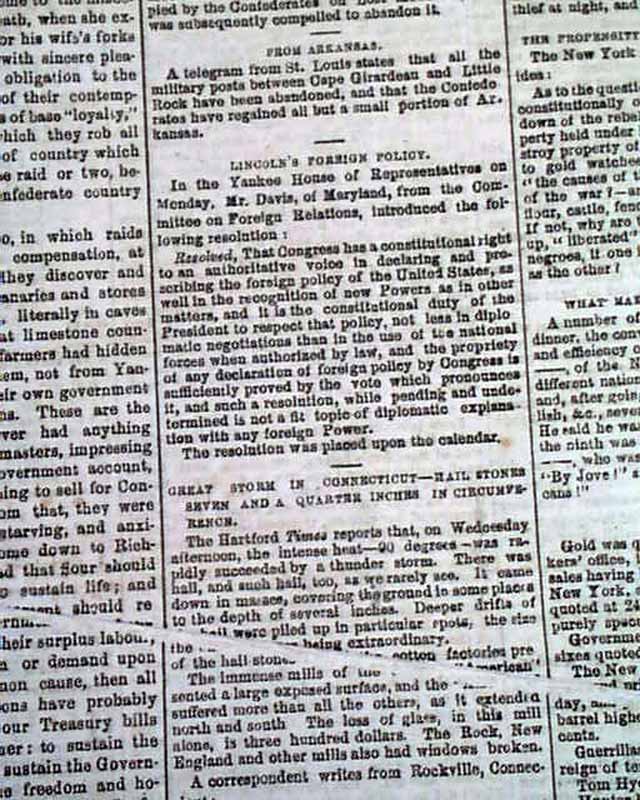 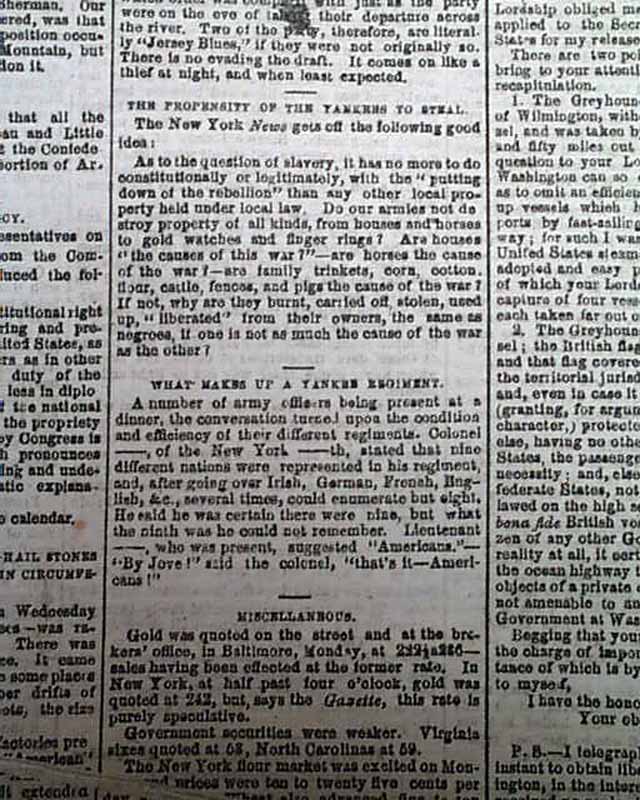 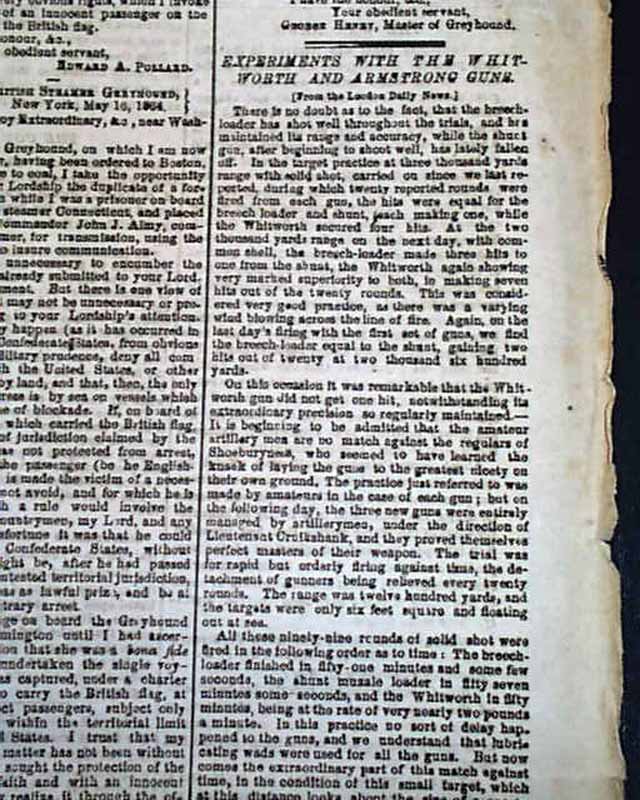 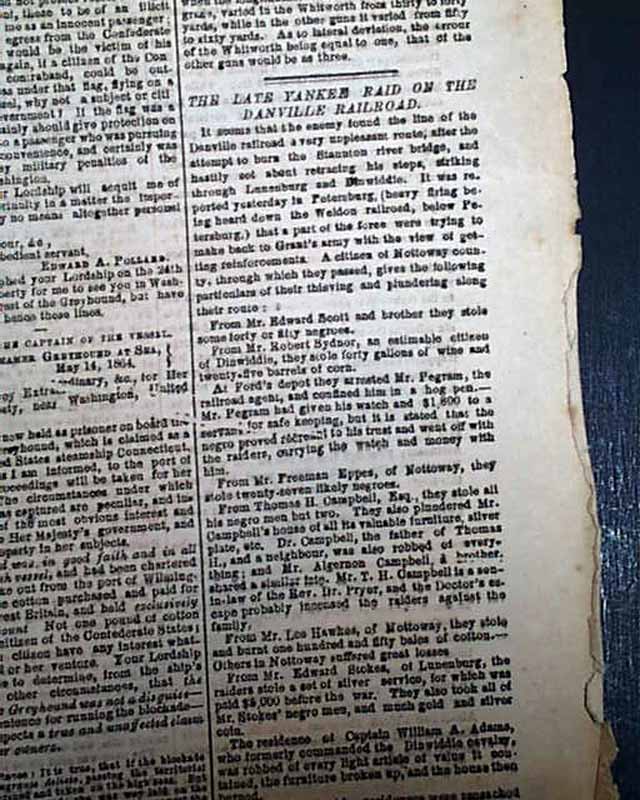 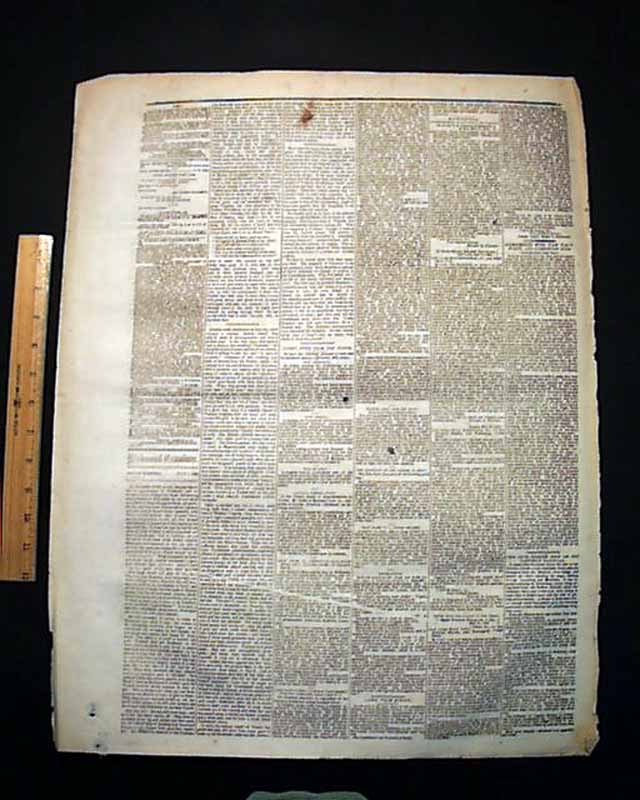