Home > Back to Search Results > "The War Tax In Virginia"...
Click image to enlarge 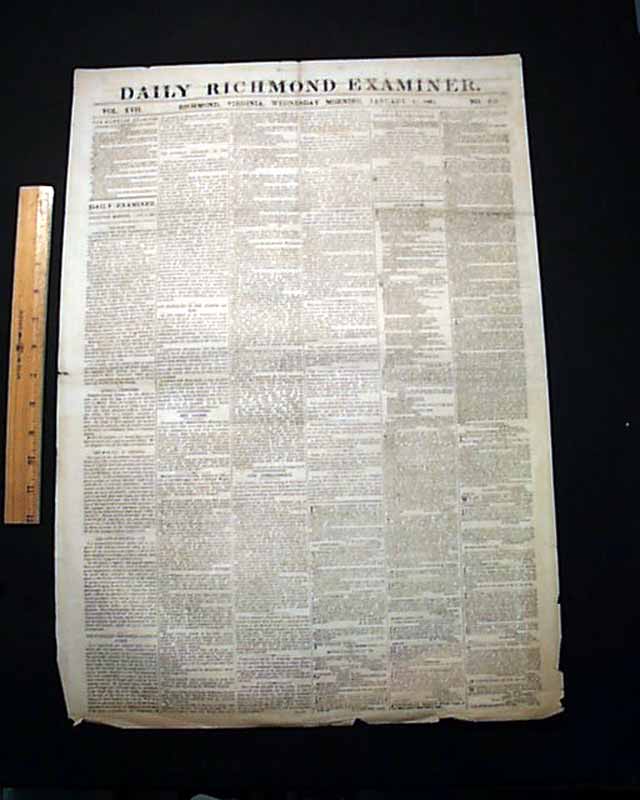 
DAILY RICHMOND EXAMINER, Virginia, Jan. 6, 1864  Not just a nice Confederate newspaper, but from the capital of the Confederacy.
Among the front page items are: "The War News" which has several reports (see); also: "Averill Prisoners" "The War Tax In Virginia" "The Anti-Substitute Law "The Blockade--The Cotton Question Again" 'The Courts" 'The Mortality in the Yankee Armies" "The Material Resources of the Confederacy" "City Intelligence" "From the Rapid Ann" and more.
The back page has the always interesting editorial as well has much reporting from: "The Confederate Congress" and "From East Tennessee" which includes: "...Burnside is still in possession of Knoxville but has he has not opened his communication by rail with Chattanooga...deprived of the food necessary to sustain so large an army as he has under his command, it is already, or soon will, become a serious question with the Yankee general how he is to subsist his men...".
Complete as a single sheet newspaper with a full banner masthead, some minor tears at margin, a very discreet archival mend to the back page, generally in very nice condition.