Home > Back to Search Results > The Napoleonic War... Recruitment ad for joining the military...
Click image to enlarge 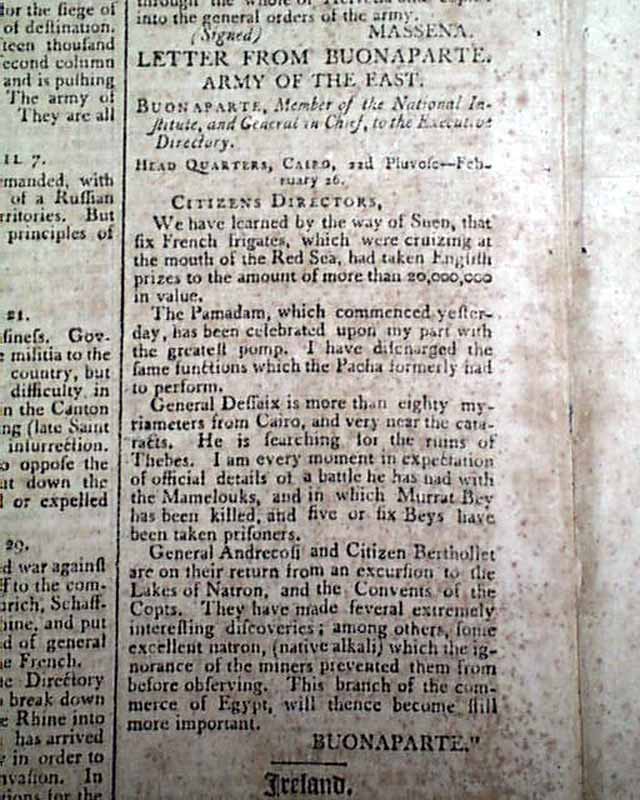 The Napoleonic War... Recruitment ad for joining the military...


THOMAS'S MASSACHUSETTS SPY OR WORCESTER GAZETTE, June 26, 1799  The front page has an interesting: "Valuable Nautical Invention" noting: "A new Sea Log has lately been invented by Messrs. Chester & Calvin Gould for which they have received Letters Patent..." with details. Inside has much on the Napoleonic Wars, including: "From Buonaparte in Egypt" and a: "Letter from Buonaparte - Army of the East" which is signed in type: Buonaparte. Page 3 has two "Once Cent Reward" ads for runaways.
The back page has an address to Stephen Decatur (see) and also a very nice recruitment ad for the military headed: "ATTENTION ! " "To all who properly estimate the Independence of America, love its Constitution, and are willing to defend its Government & Laws, in the station of Soldiers, an opportunity now presents." following which are the enticements for joining the military.
Four pages, nice condition.