Home > Back to Search Results > Reference to taxing the Americans...
Click image to enlarge 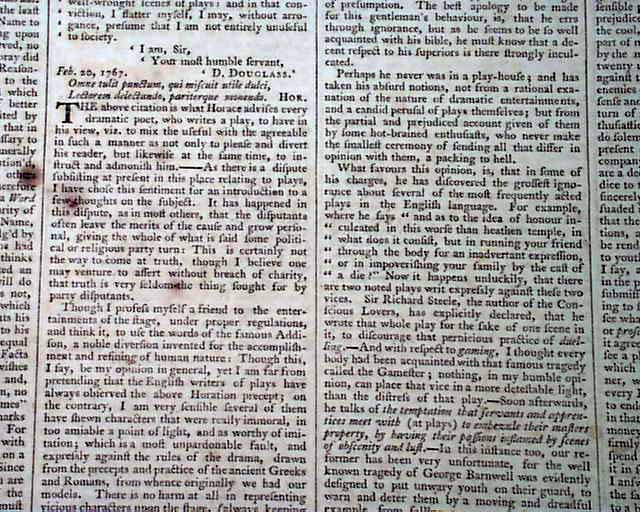 Reference to taxing the Americans...

Much of the front page is taken up with a very lengthy letter concerning the theater in America and elsewhere. Page 3 has a letter from London with criticism towards George Grenville with one bit noting: "...they bribed them to be quiet; that the evil ought to be probed to the very bottom & the real causes of our present situation out to be explored...To this G--v--le replied that he having endeavoured to make our Colonies in America contribute to the support of government, they had bribed them to be quiet by a total repeal of that law, and that it was very strange they would not do that for the relief of their poor at home, which they did for the American, who were well able to bear the tax..." (see).
Four pages, nice coat-of-arms engraving in the masthead, some light water stains, bit of foxing, minor margin wear, generally good condition.

This was a popular newspaper of the day and was a voice for the anti-British sentiment that was rapidly spreading throughout the colonies prior to the American Revolution. The paper gained much notoriety when Goddard printed an article voicing his support for the Boston Tea party. The paper's sympathies and general revolutionary message were a cause of great concern to the British. Soon the newspaper was heavily taxed for its delivery by the Crown Post (the colonial mail system in use at the time), and later the Crown Post simply refused to deliver the publication, driving the newspaper out of business in 1773. This prompted Goddard and Benjamin Franklin to establish an alternative mail system independent of the Crown Post authorities. This alternative system ultimately became the basis of a postal system that would later become the US Post Office. (credit Wikipedia)