Home > Back to Search Results > A rare issue of a short-lived "Royal" newspaper from Charleston...
Click image to enlarge 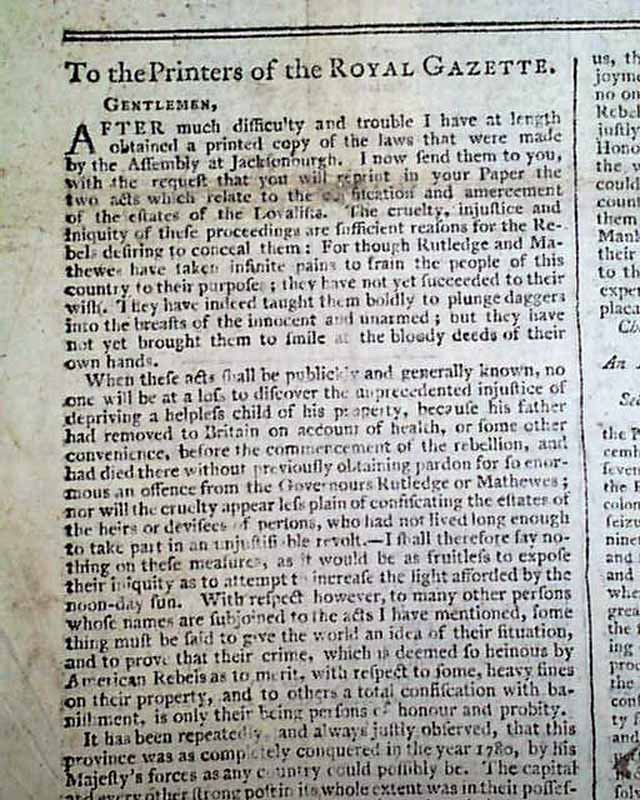 A rare issue of a short-lived "Royal" newspaper from Charleston...

Certainly a most rare title, this being just the second issue we have offered in our 40 years in the hobby. This title is  the continuation of the "South Carolina & American General  Gazette" which began in 1764, but when the British captured Charleston during the Revolution War in May, 1780, the Gazette was seized and turned over to Tory printer Robert Wells who continued the paper under the name "Royal Gazette", reflecting the British perspective. The newspaper lasted less than 18 months under this title, not including a suspension from Aug. 7 - Sept. 7, 1782. The British evacuated Charleston in December, 1782.
This issue was published five months before the British would evacuate Charleston on December 14, British General Leslie agreeing not to destroy the city if he troops could leave safely. Aware of their ultimate end in the city, the front page has a letter signed: "A Suffering Loyalist" concerning their plight, it taking over one-third of the ftpg. . Relating to this, the balance of the ftpg. is text of: "An ACT for Disposing of Certain Estates and Banishing Certain Persons therein Mentioned". Within this document is confirmation of the independence of the thirteen American colonies, and much on the  confiscation of Loyalist property, how to be handled, etc. (see for portions). This Act carries over to take nearly half of page 2. Related lists of names and another related Act fill out the balance of page 2 & a bit of page 3.
An exceedingly rare newspaper. Four pages, never bound nor trimmed, engraving of the Royal coat-of-arms in the masthead, various wear at the two folds causes some perforation and minor loss, affecting a few words, various wear at the margins but not close to any text. There are a few discrete archival mends to the central fold of pages 2 & 4.