Home > Back to Search Results > Rare title from perhaps the most infamous printer during the Revolutionary War...
Click image to enlarge 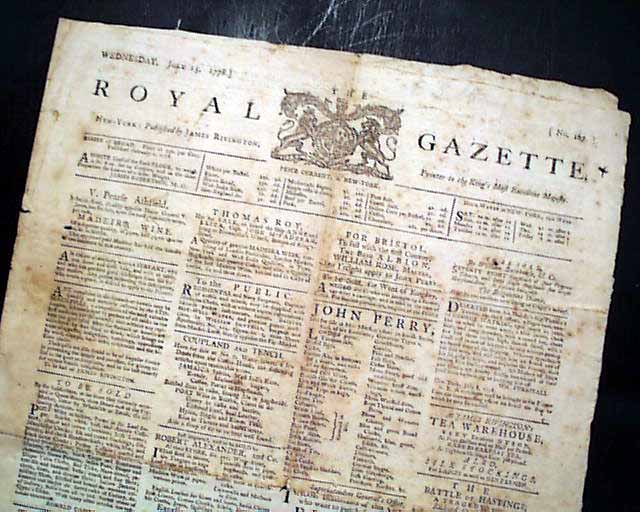 Rare title from perhaps the most infamous printer during the Revolutionary War...

This is a case where the rarity of the title equals the historic content within. This was a Tory newspaper by the infamous James Rivington who was supportive of the British cause.
Rivington's initially impartial stance shifted as the revolution loomed and public opinion polarized, until by late 1774 he was advocating the restrictive measures of the British government with such zeal and attacking the patriots so severely, that in 1775 the Whigs of Newport, Rhode Island, resolved to hold no further communication with him. The Sons of Liberty hanged Rivington in effigy. On May 10, 1775, immediately after the opening of hostilities, the Sons of Liberty gathered and mobbed Rivington’s home and press. Rivington fled to the harbor and boarded the British man-of-war Kingfisher. Assistants continued to publish the Gazetteer, but in spite of a public assurance of Rivington's personal safety from the Committee-Chamber of New York, various New York radicals entered Rivington's office, destroyed his press and converted the lead type into bullets. Another mob that day burned Rivington's house to the ground. Rivington and his family sailed for England, where he was appointed King's printer for New York, at £100 per year.
In 1777, after the secure British occupation of that city, he returned with a new press and resumed the publication of his paper under the title of "Rivington's New York Loyal Gazette", which he changed on 13 December 1777, to "The Royal Gazette", with the legend “Printer to the King’s Most Excellent Majesty” in the masthead (see). Rivington, who opened a coffee-shop adjacent to his printing-house, would have been the last New Yorker suspected of playing the part of a spy for the Continentals, but he furnished General George Washington with important information. His communications were conveyed to the American camp by agents that were ignorant of their service.
The date of Rivington's secret change of heart is disputed but when New York was evacuated in November 1783, Rivington remained in the city, much to the general surprise. Removing the royal arms from his masthead, he changed its title to "Rivington's New York Gazette and Universal Advertiser". But his business rapidly declined, his paper ceased to exist at the end of 1783, and he passed the remainder of his life in comparative poverty. (credit Wikipedia. See hyperlink for more)
And the content is great as well. Page 2 begins with a: "PROCLAMATION" which includes: "Whereas the King in Parliament being desirous to restore the blessings of reconciliation and peace to Great Britain and her colonies, did in the course of last session repeal certain acts..." with more. And this is followed by the very historic letter to the President of Congress, beginning: "With an earnest desire to stop the further effusion of blood and the calamities of war, we communicate to you, with the least possible delay after our arrival in this city, a copy of the commission with which his Majesty is pleased to honour us, as also the acts of parliament on which it is founded; and at the same time that we assure you of our most earnest desire to re-establish, on the basis of equal freedom and mutual safety, the tranquillity of this once happy empire, you will observe; that we are vested with powers equal to the purpose, and such as are even unprecedented in the annals of our history..." and much more. See the web for the full text & one of the responding documents in this issue as well, written by Henry Laurens, President of Congress at the time (when held in York, Pa. few a brief time) beginning: "...Nothing but an earnest desire to spare the farther effusion of human blood could have induced them to read a paper containing expressions so  disrespectful to his most Christian Majesty, the good & great ally to these States, or to consider propositions so derogatory to the honour of an independent nation..." with more (see).
And the content carrying over to take most of page 3 is great as well, too much to list here, but including a lengthy document from the King of England, plus a letter from Paris concerning British ships of war, signed in type by: B. Franklin and John Adams (see); plus a letter concerning: "Murder & death...An officer riding out from the barracks on Prospect Hill has been shot by an American sentinel...I demand liberty to send an officer to General Sir Henry Clinton by way of the head-quarters of General Washington, with my report of this murder." (see); and even more fine content.
A very fine newspaper on several accounts, not just for the rarity of this Loyalist newspaper from the midst of British occupation of New York, but for the fine content as well.
This is the first issue of this title we have offered from the midst of the war in many years. Four pages, never bound nor trimmed, 12 1/2 by 18 1/4 inches, minor wear at margins & the central fold with a small hole at the fold juncture, various foxing. Generally in good condition.