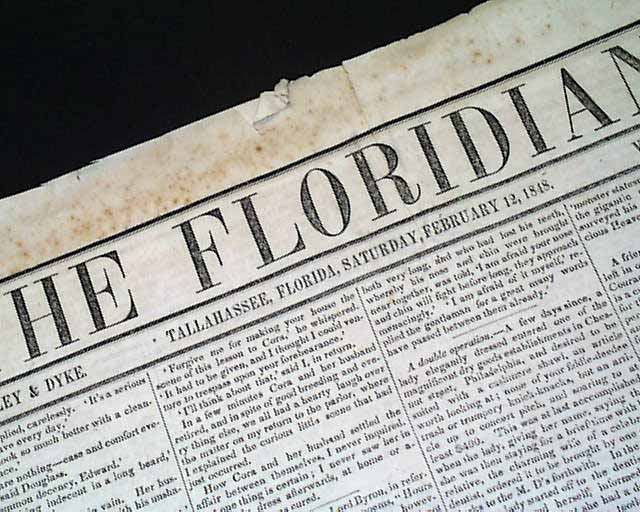 
THE FLORIDIAN, Tallahassee, Florida, Feb. 12, 1848 Nineteenth century newspapers from Florida are uncommon, particularly those from before the Civil War. Here is such an issue from the capital city of Florida, three years before the Civil War.
The ftpg. has literary & other items including: "Melancholy Affair" "The Gold Room in Windsor Castle" "Necessity of Suffering" "A Curiosity" and other items. Page 2 has content on the closing events of the Mexican War including; "Late & Important From Mexico" (see).
Pages 3 & 4 have advertisements including ones headed: "Negro Clothing" & "Sale of Negroes" with details (see). The bkpg. also has a lengthy Act concerning the sale of land in Florida, signed in type by the President: James K. Polk.
Four pages, never bound nor trimmed, wide right margin is a bit irregular & foxing, minor edge wear, generally nice condition.