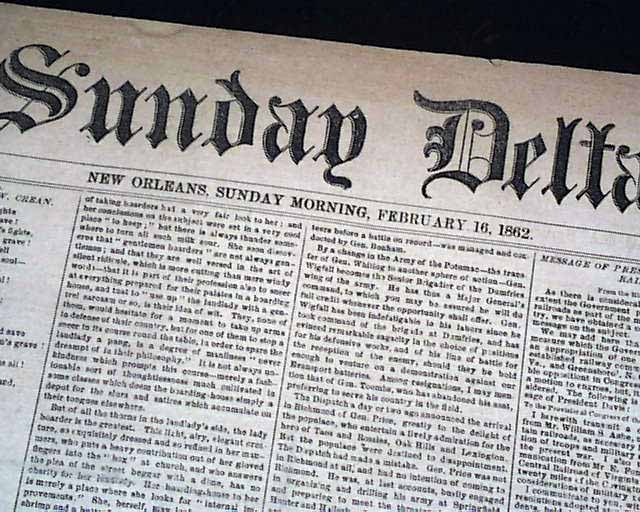 Truly Confederate newspapers from New Orleans are very difficult to find, as Admiral Farragut entered the mouth of the Mississippi in mid-April, 1862 and finally took New Orleans on April 28. Shortly thereafter Benjamin Butler moved in and took control of the city which surrendered without a fight. So "Confederate" issues from New Orleans are limited to those published between Louisiana's secession from the Union on January 26, 1861 and the end of April, 1862, just a brief 15 month period.
The front page has good reporting on the Civil War, including: "What the Morning Journals Say" "From The Seat Of War In Virginia" with a Richmond dateline; "Message of President Davis on the Railroads" which is signed by him in type: Jefferson Davis. Also: "The Merrimac--Is She A Failure?" which is an interesting item nearly a month before its famous encounter with the Monitor (see). Also: "The Blockade On The Stock Exchange" "The War In Missouri" and a few other smaller items.
War coverage continues on page 2 with: "The War In The West" "Bowling Green Evacuated" "Federal Shelled and Burned Bowling Green" "The Battle In the West" "Special Dispatches To the Delta" "Federal Account of the Fort Henry Affair".
Page 3 is entirely taken up with ads, including two illustrated slave related ads (see). The back page is mostly ads & also includes a "Negroes For Sale" ad (see).
Complete as a 4 page newspaper, light, even foxing, generally in good, clean condition with minor binding slits at the spine margin.