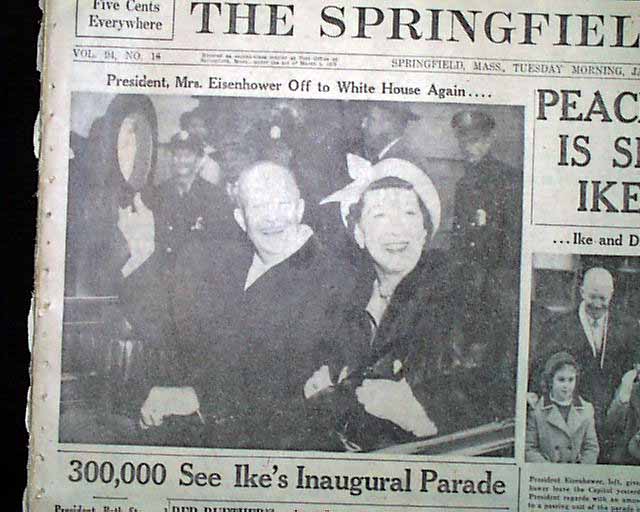 
THE SPRINGFIELD UNION, Springfield, Massachusetts, January 22, 1957  The front page has a three-line, four column headline "PEACE WITH JUSTICE IS SET AS GOAL OF IKE'S SECOND TERM" with subheads "President Sees Communism as Greatest Peril" "Eisenhower Voices Conviction Divided World Can Be Healed, but Warns Cost Will Be High In Toil, Help, Sacrifice". This also includes a large photo of "President, Mrs. Eisenhower Off to White House Again..." A smaller photo is included of President Eisenhower taking the oath of office. Inside the issue is the text of the inaugural speech.
Also on the front page is an article "Author's Son Collects $104,500 On TV Show" "Charles Van Doren, Instructor at Columbia, Sets Record for Giveaways; Has Chance to Win More". This became the game show "Twenty One" scandal in which he had received information on the questions and answers prior to the show.
Other news, sports and advertisements are within.
Complete in 36 pages with tiny binding holes along the left spine, otherwise in very good condition.