Home > Back to Search Results > Travels through America in 1780... Washington accepts the position of Commander-in-Chief in 1775...
Click image to enlarge 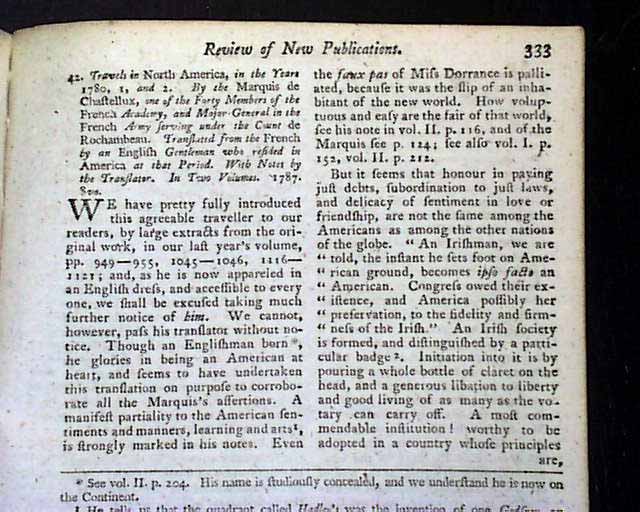 Travels through America in 1780... Washington accepts the position of Commander-in-Chief in 1775...


GENTLEMAN'S MAGAZINE, London, April, 1787  Included is a very lengthy review of a new book: "Travels in North America in the Years 1780, 1, & 2" which takes up 3 pages with much detail on lie in America during these closing years of the Revolutionary War (see for portions). An interesting and early travelogue.
Near the back is nearly a column headed: "American News" which has a notable: "...speech of General Washington when the President of the American congress informed him of being unanimously continued in the Chief Command of the American Army: " This was from 1775.  What follows is Washington's historic response (see).
Included are both plates called for, one of which is a foldout.
Complete in 86 pages, 5 by 8 inches, full title/contents page with an engraving of St. John's Gate, nice condition.