Home > Back to Search Results > Map of Italy...
Click image to enlarge 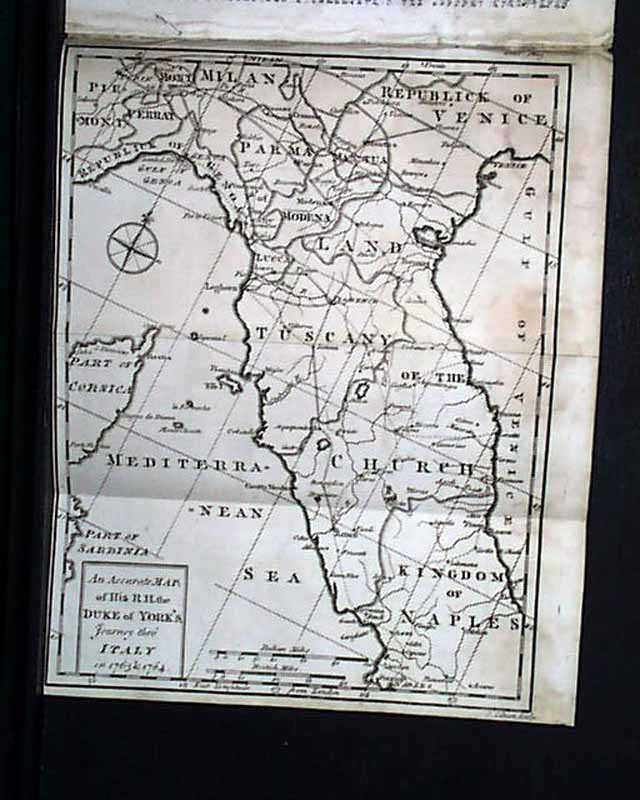 Item # 629781 GENTLEMAN'S MAGAZINE, London, September, 1764  Among the articles within are: "Inutility of Amputations" "A Description of the City of Chester"  "An Account of a Remarkable Darkness at Detroit, in America" which is an extremely early mention of Detroit (see); "Natural History of Kamtschatka" "Description of Turk's Island" and much more.
The prime piece in this issue is a nice foldout map titled: "An Accurate Map of His R.H. the Duke of York's Journey thro' Italy in 1763 and 1764" (see) which folds out to measure 8 by 10 inches .It shows part of the island of Corsica, plus the Italian peninsula from Milan to Venice to Parma, Tuscany and south to Naples.
Near the back is the "Historical Chronicle" containing various news reports of the day, which includes a report headed: "American News" and begins: "Sir William Johnson with a body of regular & provincial forces, to which more than 1000 friendly Indians have joined themselves, has lately marched to visit the forts of Oswego, Niagara, Detroit, Pittsburg, etc, in order to strike terror in the Western nations..." (see photos).
The back page is a full page chart of: "Each Day's Price of Stocks in September, 1764".
The noted map is the only plate called for in this issue.
Complete in 52 pages, measuring 5 1/4 by 8 inches, a couple wormholes, otherwise in very good condition. Includes the full title/contents page featuring an engraving of St. John's Gate.