Home > Back to Search Results > Leo Frank Lynched in 1915...
Click image to enlarge 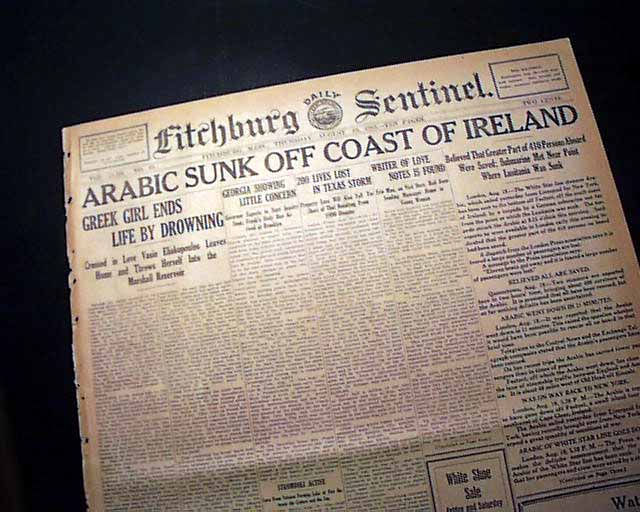 This 10 page newspaper has one column headlines on the back page:

Tells of the recent lynching of Leo Frank for the murder of a young girl.

Other news of the day. Light browning with some margin wear, mainly along the spine, otherwise good. Should be handled with care.

wikipedia notes: Leo Max Frank (April 17, 1884 – August 17, 1915) was an American man who became the only known Jew in history to be lynched on American soil. The manager of a pencil factory in Atlanta, Georgia, Frank was convicted in the rape and murder of a pencil-factory worker, 13-year-old Mary Phagan. The case is widely regarded as having been a miscarriage of justice. It was the focus of many conflicting cultural pressures, and the jury's conclusion represented in part, class and regional resentment of educated Northern industrialists who were perceived to be wielding too much power in the South, threatening southern culture and morality. The trial was sensationalized by the media. The Georgia politician and publisher Tom Watson used the case to build personal political power and support for a revival of the Ku Klux Klan.

Shortly after Frank's conviction, new evidence emerged that cast doubt on his guilt. After the governor commuted his death sentence to life imprisonment, Frank was kidnapped from prison and lynched by a group of prominent citizens who called themselves the "Knights of Mary Phagan". The group is reported to have included the son of a senator, a former governor, lawyers, and a prosecutor.