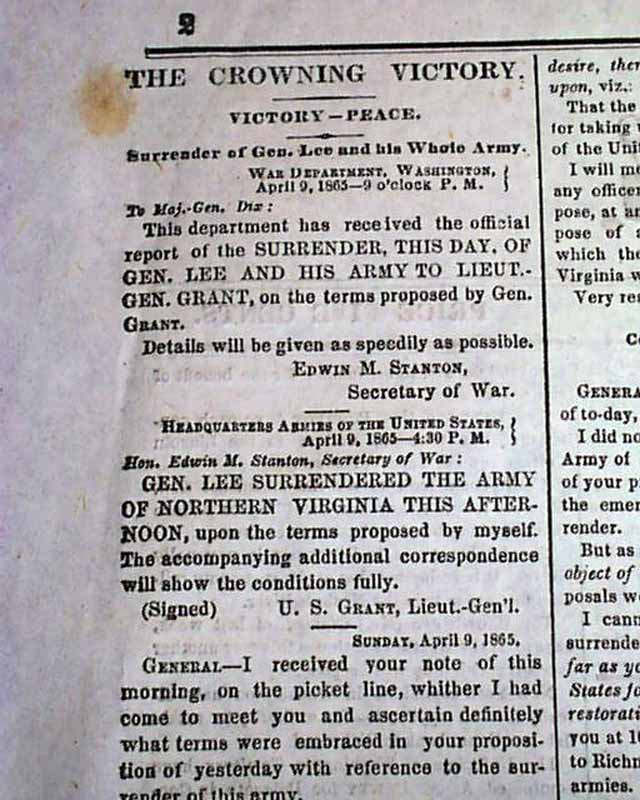 We are pleased to offer this terrific & much desired issue on the end of the Civil War. The surrender of Lee at Appomattox has always been a keystone issue for any Civil War collection.
Page 2 begins with: "The Crowning Victory" "Victory--Peace" with the leading dispatch reading: "This department has received the official report of the SURRENDER, THIS DAY, OF GEN. LEE AND HIS ARMY TO LIEUT. GENERAL GRANT, on the terms proposed by Grant. Details will be presented as speedily as possible." This is followed by Grant's official dispatch reading: "GEN LEE SURRENDERED THE ARMY OF NORTHERN VIRGINIA THIS AFTERNOON, Upon the terms proposed by myself. The accompanying additional correspondence will show the conditions fully." signed in type: U.S. Grant. What follows are the many dispatches between Grant and Lee ironing out the details for the surrender taking over two columns.
There is a significant editorial on page 4 headed: "The Surrender of Gen. Lee--The End of the Great Rebellion" which begins: "The great struggle is over. Gen. Robert E. Lee and the Army of Northern Virginia surrendered on Sunday to Lieut.-Gen,. U.S. Grant..." (see for beginning).
This report was in the April 10 issue of the daily edition of the Times and recently sold for $1050. We offer this semi-weekly edition one day later for dramatically less.
Eight pages, never bound nor trimmed so it folds out to one large sheet, two folds, minor ftpg. staining, generally very nice condition.