Home > Back to Search Results > A new & curious invention for battle use...
Click image to enlarge 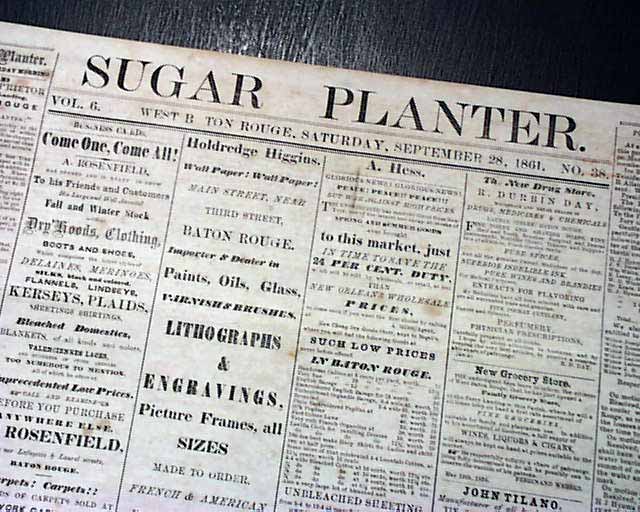 A new & curious invention for battle use...

Here is a very uncommon title from Louisiana during the first year of the Civil War. The front page is filled with ads, and among the reports on the back page are a political notice supporting: "CANDIDATES - Confederate States of America - For President, JEFFERSON DAVIS, of Mississippi - For Vice President, ALEXANDER H. STEPHENS, of Georgia..." with more (see). "Important from Lovattsville" includes: "...Gen. McClellan ordered  an experiment to be made with Prof. Morse's Calcium Sharp-shooters...The double barreled Calcium Spectral Photoscopic Brilliantines, being lighted & carefully aimed, threw a flood of terrific light upon the opposite shore of the river...The spectacle was magnificently sublime. The country for miles around was lighted up with a dense & splendid noonday glare, discovering rebel tents...Their pickets were driven in completely dazzled..." with much more on this curious invention. Also: "Federal Report of a Confederate Movement in Missouri" "The Taking of Muldrough's Hill" and a wealthy of other, short items relating to the Civil War.
Complete as a single sheet newspaper, very nice condition.