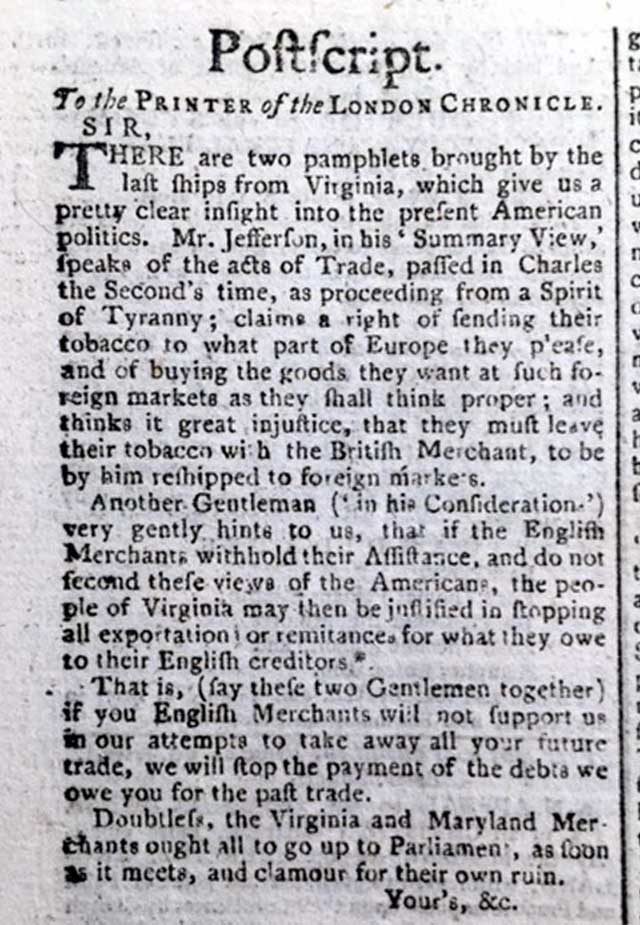 The ftpg. has an item from Providence, Rhode Island, which mentioned in part: "...advice that a mob was raised consisting of some hundreds of people who threatened, & were hourly expected to come to destroy said town of East Greenwich, in order to shew their resentment of the injury which they said had been offered to Stephen Arnold... one of the Justices of the Inferior Court of Common Please...who had been charged with industriously propagating principles unfriendly to American liberty, & had been hung in effigy by some of the people of East Greenwich..." with more, carrying over to pg. 2 which also includes the "...declaration and confession..." of Stephen Arnold, signed by him in type.
Another page has: "The Thoughts of a Traveler Upon our American Disputes" which is continued from a previous issue & which takes two-thirds of the page (see photos for portions) - pened by William Draper (unsigned).
Yet another report from Boston begins:  "As to public affairs here, I shall only say that things seem to be running very fast into confusion..." with more (see).
The backpage has under Postscript: "There are two pamphlets brought by the last ships from Virginia, which give us a pretty clear insight into the present American politics. Mr. Jefferson, in his 'Summary View,' speaks of the acts of Trade, passed in Charles the Second's time, as proceeding from a Spirit of Tyranny..." - being a mention of Thomas Jefferson's Summary View, perhaps the earliest of his writings which made it to print (see the London Chronicle from the previous week).
Eight pages, red ink tax stamp at the bottom of page four, 8 1/2 by 11 1/2 inches, very nice condition.