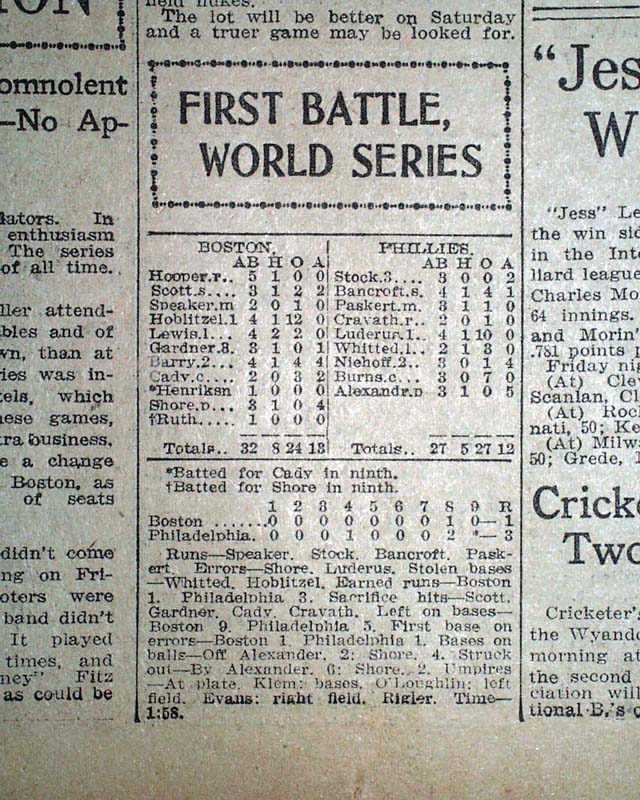 This is 7-issue set includes coverage of all five games of the 1915 World Series which was won by the Boston Red Sox. Notable was the first-ever World Series appearance of Babe Ruth (although inconsequential to the outcome). The first game was won by the Philadelphia Phillies, which was to be their last victory in a World Series game for 65 years as they were swept over the course of the next four games, and did not win another World Series game until 1980.
The set is bound together and therefore includes two additional issues in the date-sequence which do not contain game reports.
Issues from 1915 have a tendency to be very brittle. While this set does have minor edge-tears and some flaking, it is in unusually good (but still fragile) condition as compared to similar issues from 1915. All issues are believed to be complete, but due to the large number of pages, it has not been confirmed.However, all game coverage has been verified to be present.
Note: If purchasing a storage portfolio or folder, at least three will be needed to contain all seven issues. Also, this set does not qualify for free shipping.
This item is not eligible for free shipping.