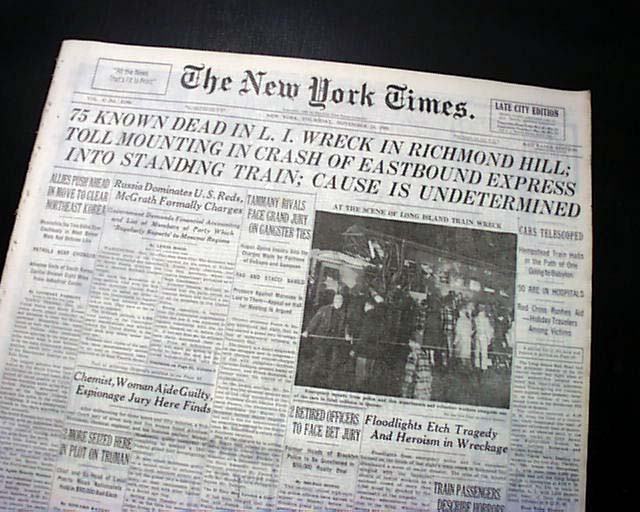 The front page has a nice banner headline: "75 KNOWN DEAD IN L. I. WRECK IN RICHMOND HILL; TOLL MOUNTING IN CRASH OF EASTBOUND EXPRESS INTO STANDING TRAIN; CAUSE IS UNDETERMINED" with subheads and related photo. More inside. (see) Always nice to have notable events in history reported in this World famous publication, especially on this topic.
Other news, sports and advertisements of the day. Complete in 72 pages, this is the rare rag edition that was produced on very high quality newsprint, with a high percentage of cotton & linen content, allowing the issues to remain very white & sturdy into the present. Given the subscription cost, libraries & institutions rather than individuals were the primary subscribers of these high-quality editions. Nice condition.

wikipedia notes: The Kew Gardens station has the unfortunate distinction of being the site of the worst accident in Long Island Rail Road history, as well as the worst in New York State History. On November 22, 1950, a collision between two Long Island Rail Road commuter trains killed 79 people and injured hundreds.[1][2] This occurred nine months after a collision at Rockville Centre (LIRR station) on February 17, 1950 that resulted in the deaths of 32 people, and serious injury of 158 people. A far more notorious historical aspect is the 1964 murder of Kitty Genovese, which occurred near this station.