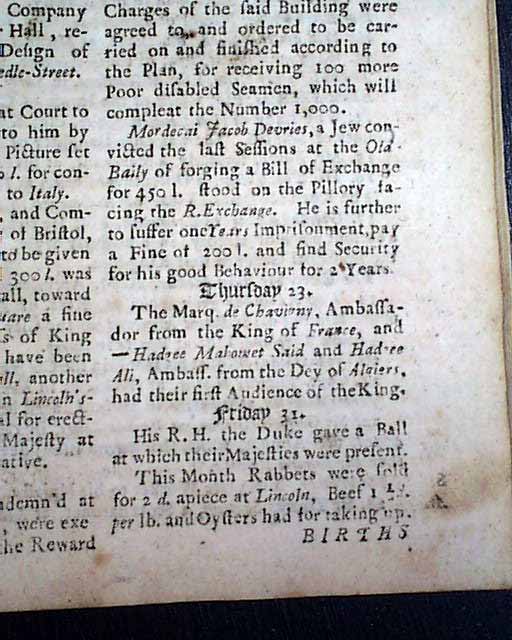 Perhaps the most interesting content is found near the back under "The Monthly Intelligencer" which includes among other news reports from throughout Europe: "Mordecai Jacob Devries, a Jew convicted the last sessions at the Old Bailey of forging a Bill of Exchange for 450 l. stood on the pillory facing the R. Exchange..." with a bit more.

Additional articles include: "A View of the Weekly Disputes & Essays in This Month" which takes the majority of the issue, "On the Liberty of the Press, and Libels", "Disappointed Love Fatal", "Of Fraud and Deceit", "Tom Careless or the Man of Pleasure", "Of the Law & Lawyers", "On the Spleen", "On Nuptial Liberty", "Vanity in Old Ladies", plus many other reports from other newspapers of the day.

This is a first edition which is rarely found from the first year, as most of those on the market are 2nd through 7th editions. The first several years were reprinted later in the 1730's & early 1740's so institutions and private subscribers could complete their sets as the popularity of this title increased in the mid 1730's.

Complete in 40 pages with full title/contents page.  The magazine measures 5 by 7 3/4 inches and is in very nice condition. There were no plates or maps called for in the early years of this title.