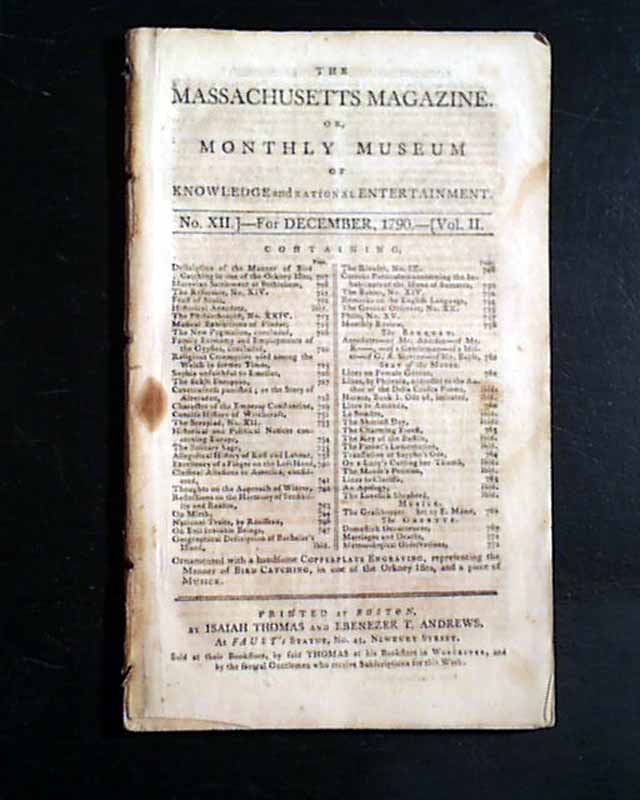 The bulk of the issue is taken up with a wide range of eclectic articles as noted in the title/contents page. Among the articles are: "Account of the Moravian Settlement at Bethlehem in Pennsylvania" which takes over a full page; "The Family Economy & Employments of the Gypsies" "Chinese Letter" "Classical Allusions to America Considered" "On Evil Invisible Beings" "Geographical Description of Bachelor's Island" "Curious Particulars Concerning the Inhabitants of the Island of Sumatra" "Remarks on the English Language, by Noah Webster" and much more.
But certainly the most notable content is the 1 1/2 pages taken up with: "President Washington's Speech" which was his 2nd state-of-the-union address, signed by him in type: George Washington. Other fine news content as well including a report of the erection of the: "Column on Beacon Hill" with details, and a letter concerning the death of Ben Franklin.
Contains 66 of 68 pages as there is a leaf with poetry missing near the back. Full title/contents page, lacking the plate called for, 5 by 8 inches, generally good condition.
Eighteenth century American magazines are increasingly scarce in today's market. This title was published by the famed Isaiah Thomas, the patriot printer from the Revolutionary War & founder of the American Antiquarian Society.