Home > Back to Search Results > The Battle of New York...
Click image to enlarge 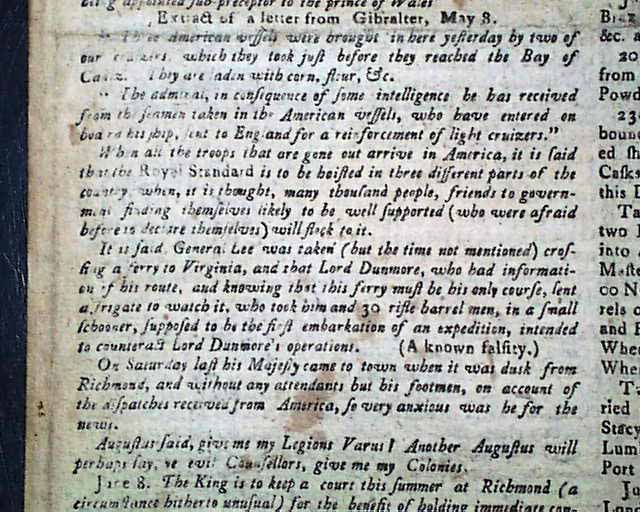 The front page has an item mentioning: "It is said General Lee was taken...crossing a ferry to Virginia & that Lord Dunmore, who had information of his route...sent a frigate to watch it, who took him and 30 rifle barrel men..." [must be untrue as he was not captured until December]. Another item makes an interesting observation: "...we as yet turned the tables on ourselves during the American war; for...instead of raising taxes on the Americans (the object of the war) we have been obliged o tax ourselves and that so enormously, that continuing it another year without better success may draw this nation to the verge of a general bankruptcy."
Page 2 has a report from Harlem, near New York City, with some details on the historic Battle of New York, noting in part: "Yesterday was an unlucky day for us. The enemy landed...at Turtle Bay, below Hell-gate...brigade under General Parsons were  soon obliged to retire from the waterside & give ground for the enemy to land. Gen. Mifflin immediately marched from Mount Washington...Three days since it was resolved to quit the town 7 we have been removing ever since. We have taken almost every thing out of the city...New York never was tenable & the holding of it obliged us to divide our army into many weak parts...Monday se-night, the Hon. Benjamin Franklin, John Adams, and Edward Rutledge...set off for New York in order to confer with Lord Howe...They have since returned..." and more (see).
Inside also has a document from Congress concerning arms & ammunition of the Continental troops, signed in type: John Hancock. A letter from Ticonderoga includes: "The enemy have not made any appearance here yet...mean to act only o the defensive. Gen. Arnold is about 100 miles down Lake Champlain...where he is watching the motions of the enemy...".
Page 3 has with a letter beginning: "If the account of the burning of Falmouth is true, I shall blush when ever I recollect that I am an Englishman...". More war content as well, including some back page content.
Four pages, bit of foxing, very nice condition.