Home > Back to Search Results > Battle of Fort Donelson...
Click image to enlarge 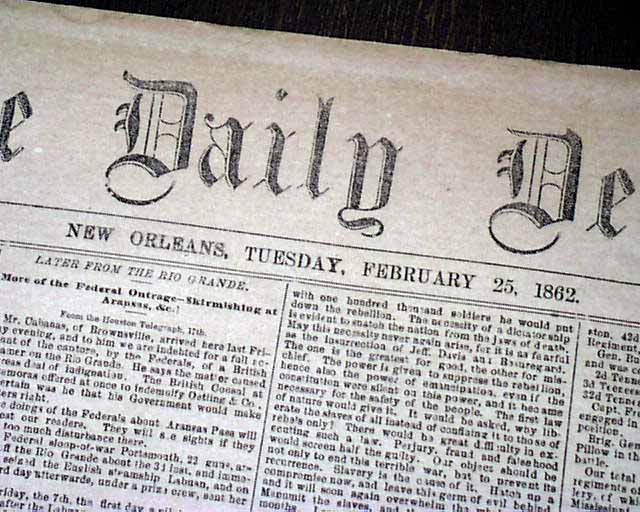 Truly Confederate newspapers from New Orleans are very difficult to find, as Admiral Farragut entered the mouth of the Mississippi in mid-April, 1862 and finally took New Orleans on April 28. Shortly thereafter Benjamin Butler moved in and took control of the city, it surrendering without a fight. So "Confederate" issues from New Orleans are limited to those published between Louisiana's secession from the Union on January 26, 1861 and the end of April, 1862, just a brief 15 month period.
This is a very nice issue as the front page has column heads including: "Enemy's Report of the Loss at Fort Donelson" "Between 5000 and 8000 of the Enemy Killed & Wounded" "Gunboats in Sight of Columbus" "Beauregard Convalescent" "Cavalry Engagement Near Paris, Tenn." "Entrance of the Enemy into Nashville" "The Battle of Fort Donelson" and more.
Four pages, a bit irregular at the spine, even toning throughout, generally nice condition.