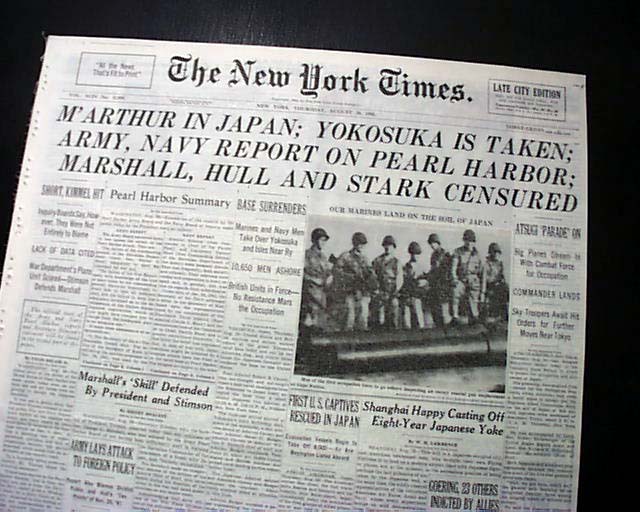 The front page has a nice banner headline: "M'ARTHUR IN JAPAN; YOKOSUKA IS TAKEN; ARMY, NAVY REPORT ON PEARL HARBOR; MARSHALL, HULL AND STARK CENSURED" with many subheads and related photo. (see) First report coverage on the initial landing in Japan by the United States Marines and General Douglas MacArthur soon after the end of World War II. The official signing of surrender would take place on board the USS Missouri a few days later. Always nice to have notable events in history reported in this World famous publication.
Other news, sports and advertisements of the day with the indictment of Hermann Goering and 23 other Nazis for war crimes. Complete in 32 pages, this is the rare rag edition that was produced on very high quality newsprint, with a high percentage of cotton & linen content, allowing the issues to remain very white & sturdy into the present. Given the subscription cost, libraries & institutions rather than individuals were the primary subscribers of these high-quality editions. Very nice condition.