Home > Back to Search Results > 1941 Shah of Iran abdicates....
Click image to enlarge 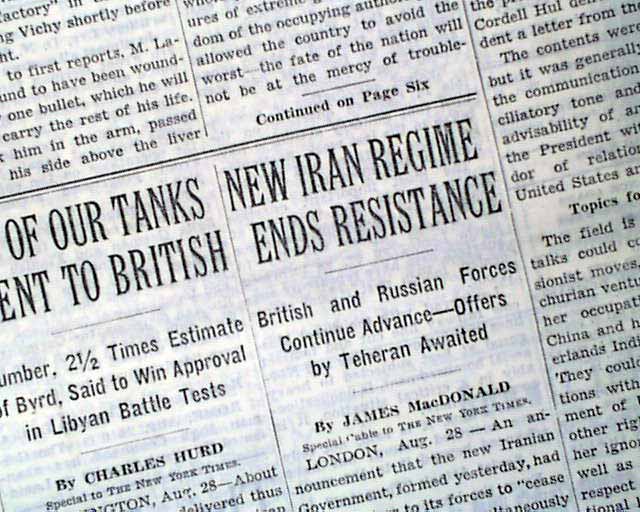 The front page has one column headings: "NEW IRAN REGIME ENDS RESISTANCE" "British and Russian Forces Continue Advance--Offers by Teheran Awaited" (see)
First report coverage on the abdication of Reza Shah in Iran during World War II. Also front page reporting on the tensions with Japan. Always nice to have notable events in history reported in this World famous publication.
A very large advertisement on the back page of this issue promoting the article in an upcoming issue of American Magazine titled: "Why Doesn't Somebody KILL HITLER?" and beneath this large type is also: "And it would be so simple. Just one small bullet, or a pineapple from a second story hotel window. What a target, as he rides in his car, standing up, through the heiling crowd below! You couldn't miss!" plus more.
Other news, sports and advertisements of the day. Complete in 36 pages, this is the rare rag edition that was produced on very high quality newsprint, with a high percentage of cotton & linen content, allowing the issues to remain very white & sturdy into the present. Given the subscription cost, libraries & institutions rather than individuals were the primary subscribers of these high-quality editions. Very nice condition.