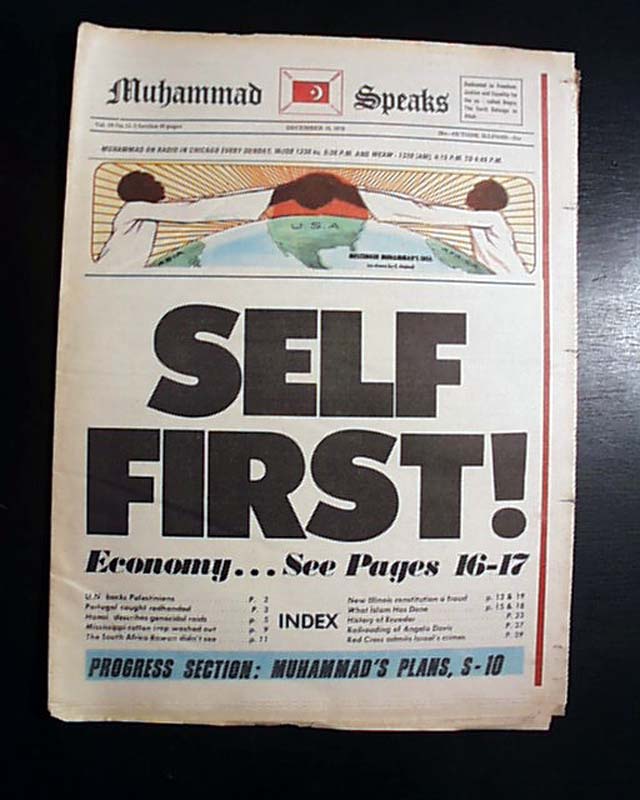 
MUHAMMAD SPEAKS, Chicago, Illinois, Dec. 18, 1970  This newspaper was one of the most widely-read ever produced by an African American organization. Nation of Islam leader Elijah Muhammad began the publication on May 1960 as a weekly publication. It was distributed nationwide by the Nation Of Islam and covered current events around the world as well as relevant news in African American communities, especially items concerning the Nation of Islam itself.
The bold banner headline reads: "SELF FIRST ! " and noting that within is a: "Progress Section: Muhammad's Plans" which  has a photo of Elijah Muhammad. Other articles inside include: "Hanoi Describes Genocidal Raids" "The South Africa Rowan Didn't See" "What Islam Has Done" "Railroading of Angela Davis" which includes a photo of her. More as well.
A box within the masthead has: "Dedicated to Freedom, Justice and Equality for the so-called Negro. The Earth Belongs to Allah."
Complete in 32 pages, tabloid size, nice condition.