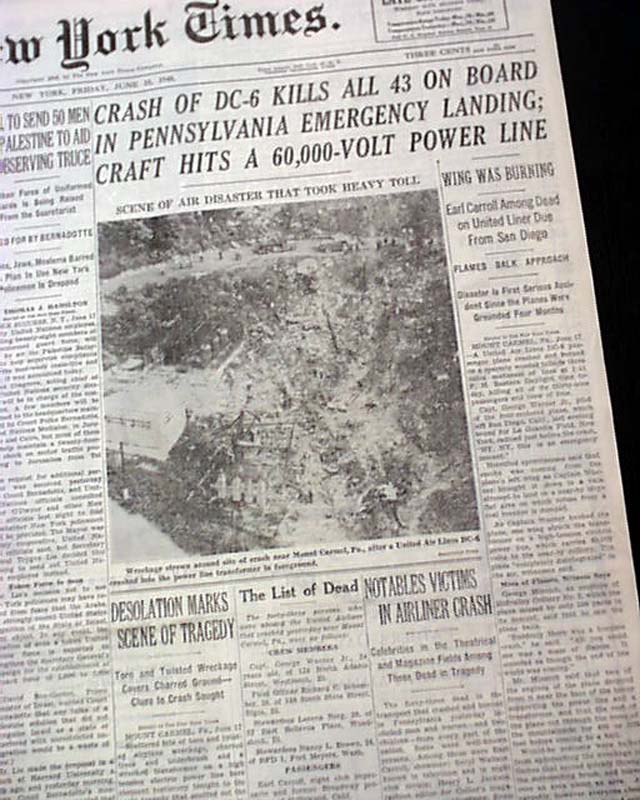 The front page has a four column headline: "CRASH OF DC-6 KILLS ALL 43 ON BOARD IN PENNSYLVANIA EMERGENCY LANDING; CRAFT HITS 60,000-VOLT POWER LINE" with subheads and photo of the crash site. (see)  Much more on page 3 with more related photos and map. Loads of text. Too much to photograph here. First report coverage on the United Airlines Flight 624 disaster near Mt. Carmel, Pennsylvania. Always nice to have notable events in history reported in this World famous publication.
Other news, sports and advertisements of the day. Complete in 46 pages, this is the rare rag edition that was produced on very high quality newsprint, with a high percentage of cotton & linen content, allowing the issues to remain very white & sturdy into the present. Given the subscription cost, libraries & institutions rather than individuals were the primary subscribers of these high-quality editions. Nice condition.

wikipedia notes: United Airlines Flight 624, a Douglas DC-6 airliner, registration NC37506, was a scheduled passenger flight that originated in San Diego, California with stops in Los Angeles and Chicago en route to LaGuardia Airport in New York City. The four-engine propeller-driven airplane crashed at 1:41 p.m. Eastern Daylight Time on June 17, 1948 outside of Aristes, Pennsylvania, killing all 4 crew members and 39 passengers on board.