Home > Back to Search Results > Actress Peg Entwistle & her suicide jump from the "Hollywood" sign...
Click image to enlarge 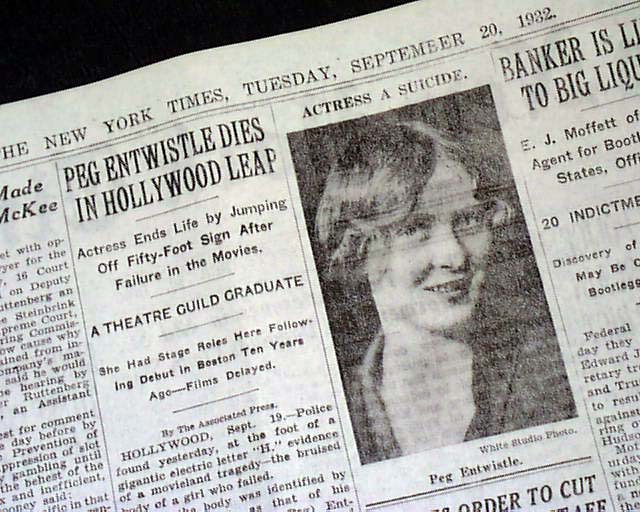 Actress Peg Entwistle & her suicide jump from the "Hollywood" sign...


NEW YORK TIMES, September 20, 1932  Page 2 has one column heads including: "PEG ENTWISTLE DIES IN HOLLYWOOD LEAP" "Actress Ends Life by Jumping Off Fifty-Foot Sign After Failure in the Movies" and more with a photo of Entwistle. This young actress, just 24 at the time, jumped off the letter "H" of the Hollywoodland sign in California, some years before the famous sign would be shorted to just "Hollywood". See the Wikipedia report on Peg Entwistle as she has remained a part of popular culture with "sightings" of her ghost, songs named after her and a theatrical production as well.
Complete in  44 pages, this is the "rag edition" printed on very high quality newsprint meant for institutional use. Great condition.