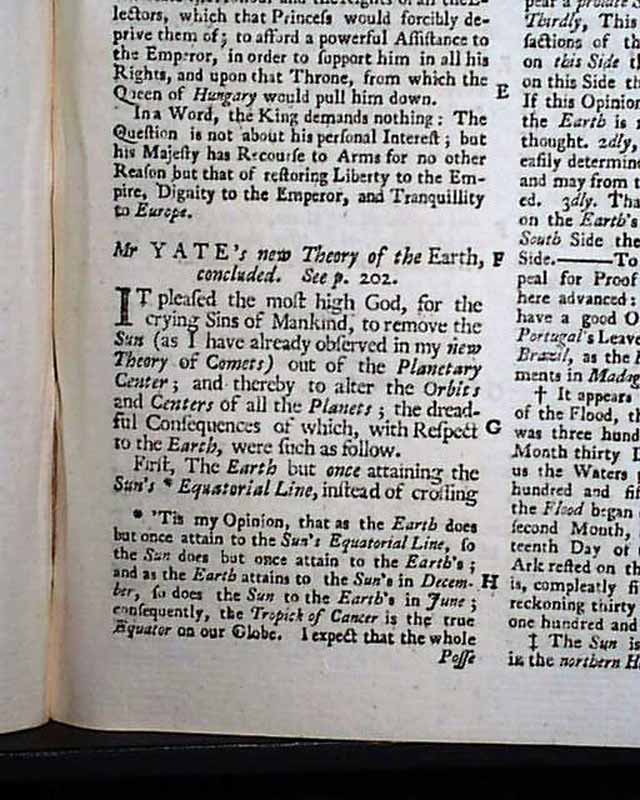 Over 9 pages at the beginning of the issue are taken up with reports on events in Parliament under the guise of: "Proceedings & Debates in the Senate of Lilliput" as direct reporting on Parliamentary events was prohibited.
Among various other articles found in this issue are:

* "Bill for Speedy Manning the Fleet" which takes 7 pages.
* "On Writing History, by M. Voltaire"
*  a continued list of: "Ships Taken from the French by the English"
* "The Queen of Hungary's Army in order of Battle" is a chart
* "The King of Prussia's Manifesto"
* "Mr. Yate's new Theory of the Earth"
* "Hypothesis Concerning Comet's Tails examined"
* "On the Present State, etc. of Physic and Surgery"

There is also a full page sheet of music.
Near the back is the "Historical Chronicle" which has various news reports from throughout Europe. Included also is a report from St. Kitt's in the Caribbean, also one headed: "Extract of a Letter from Jamaica".
There is also a lengthy report datelined: "Boston in New England" which takes most of a column.
Complete in 54 pgs. with full title/index page which contains an engraving of St. John's Gate.  Measures about 5 1/4 by 8 1/4 inches, very nice condition. There are no maps or plates called for in this issue.