Home > Back to Search Results > from Charles Town...
Click image to enlarge 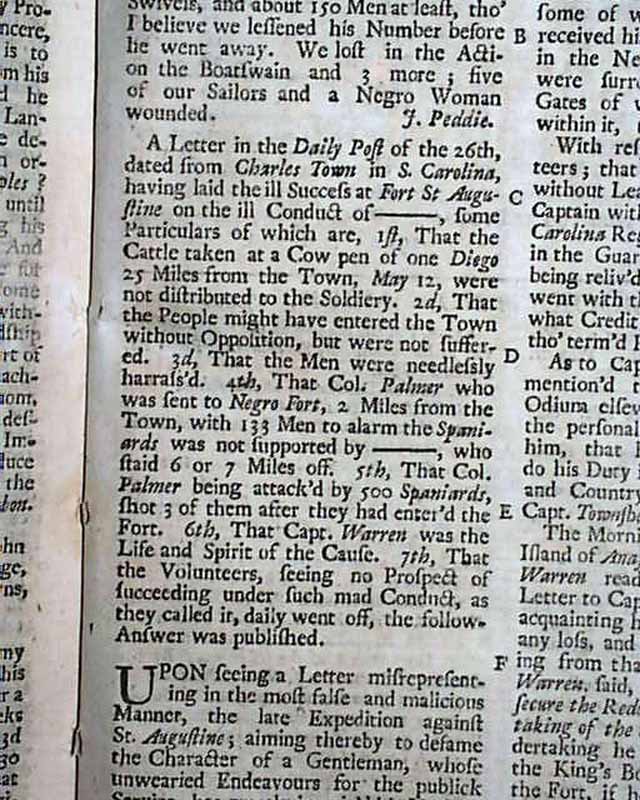 Item # 625389 THE GENTLEMAN'S MAGAZINE, London, November, 1740  Among the articles noted in the table of contents are: "Remarks on the Woolen Trade" "Article of the Treaty of Utrecht Relating thereto" "The State of the Press & Hardships of Printers" "Debates in the Senate of Great Lilliput Continued" "His Majesty's Speech equal to a Message"  & more.
Near the back is a report which includes: "A letter in the Daily Post...from Charles Town in S. Carolina, having laid the ill success at Fort St. Augustine on the ill conduct of...some particulars of which are..." with more (see).  This is followed by another article which includes: "...letter misrepresenting in the most false & malicious manner the late expedition against St. Augustine, aiming thereby to defame the character of a gentleman, whose unwearied endeavours for the publick service has greatly impair'd his health; and as I, who am a captain in General Oglethorpe's regiment was present..." with more (see) taking over half of the page.
Complete in 48 pages with full title/contents page featuring an engraving of St. John's Gate, measures 5 by 8 inches. Nice condition.