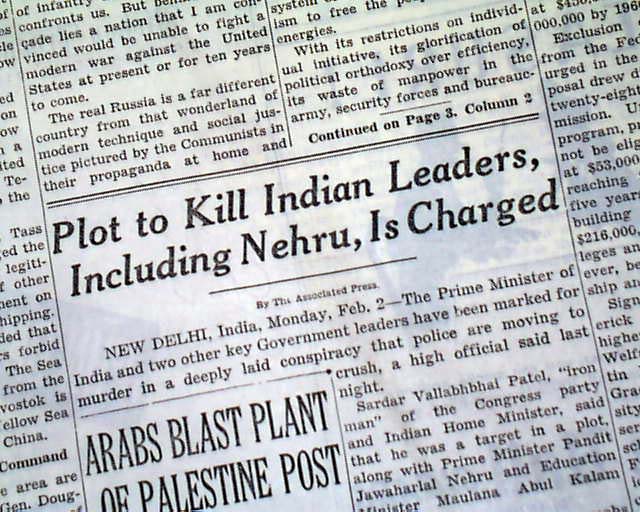 The front page has a two column heading: "Plot to Kill Indian Leaders, Including Nehru, Is Charged" Coverage continues on page 3 with large photo of Gandhi's Pyre. (see)
Also on the front page is a one column heading: "ARABS BLAST PLANT OF PALESTINE POST" with subhead. (see)
Other news, sports and advertisements of the day. Complete in 38 pages, this is the rare rag edition that was produced on very high quality newsprint, with a high percentage of cotton & linen content, allowing the issues to remain very white & sturdy into the present. Given the subscription cost, libraries & institutions rather than individuals were the primary subscribers of these high-quality editions. Nice condition.

wikipedia notes: Orville succeeded to the presidency of the Wright company upon Wilbur's death. Sharing Wilbur's distaste for business but not his brother's executive skills, Orville sold the company in 1915. He, Katharine and their father Milton moved to a mansion, Hawthorn Hill, Oakwood, Ohio, which the newly wealthy family built. Milton died in his sleep in 1917. Orville made his last flight as a pilot in 1918. He retired from business and became an elder statesman of aviation, serving on various official boards and committees, including the National Advisory Committee for Aeronautics (NACA), predecessor agency to the National Aeronautics and Space Administration (NASA). Katharine married a former Oberlin classmate in 1926, which greatly upset Orville. He refused to attend the wedding or even communicate with her. He finally agreed to see her, apparently at Lorin's insistence, just before she died of pneumonia in 1929.

On 19 April 1944, the second production Lockheed Constellation, piloted by Howard Hughes and TWA president Jack Frye, flew from Burbank, California to Washington D.C. in 6 hours and 57 minutes. On the return trip, the aircraft stopped at Wright Field to give Orville Wright his last airplane flight, more than 40 years after his historic first flight. He may even have briefly handled the controls. He commented that the wingspan of the Constellation was longer than the distance of his first flight.[72]

Orville died in 1948 after his second heart attack, having lived from the horse-and-buggy age to the dawn of supersonic flight. Both brothers are buried at the family plot at Woodland Cemetery, Dayton, Ohio.