Home > Back to Search Results > 1936 Jesse Owens at the Berlin Olympics...
Click image to enlarge 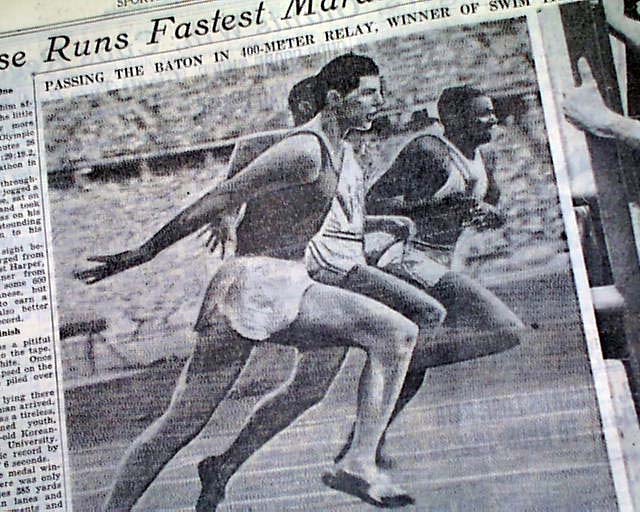 The sports section has various reports from the Olympic Games in Berlin as well of several photos, one captioned: "Jesse Owens handing the stick to his American team-mate, Ralph Metcalf...the United States quartet won in 0:39:8 to set a world record." [Owens is barely visible in the photo]. One article includes: "The American 400 meter sprint four flashed around the red clay circuit like chained lightning. Owens opened a four-yard lead, Metcalfe made it seven..." with a bit more (see photos). Elsewhere under "Olympic Highlights In Events Yesterday" is: "...America's 400 meter relay team of Jesse Owens, Ralph Metcalfe, Foy Draper and Frank Wykoff lowered the world record to 39.8 seconds..." (see photos). This gave Jesse Owens his 4th gold medal.
A sidebar to the Olympic games was Adolph Hitler's refusal to acknowledge the achievements of the African-American athletes, not surprising given his belief that only his superior German Aryan race would dominate at the games. This is corroborated by a sport page report in another issue which includes: "...So delighted was Chancellor Hitler  by the gallant fight that Long had made that he congratulated him privately just before he himself left the stadium. In fact, his eagerness to receive the youthful German was so great that the Fuehrer condescended to wait until his emissaries had pried Long loose from Owens, with whom he was affectionately walking along the track arm and arm. All the Negro received was his second gold medal, which probably satisfied him well enough at that...".
Other news, sports and advertisements of the day. Complete in 32 pages, this is the rare rag edition that was produced on very high quality newsprint, with a high percentage of cotton & linen content, allowing the issues to remain very white & sturdy into the present. Given the subscription cost, libraries & institutions rather than individuals were the primary subscribers of these high-quality editions. Very nice condition.