Home > Back to Search Results > Much on the Battle of the Thames...
Click image to enlarge 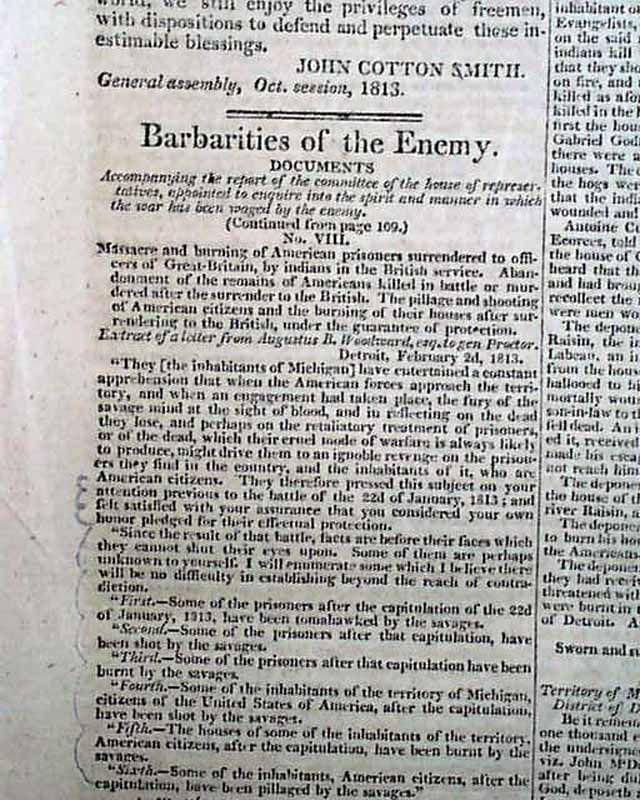 Much on the Battle of the Thames...


THE WEEKLY REGISTER, Baltimore, Maryland, Oct. 23, 1813  Certainly the most significant report in this issue is the report of Harrison's significant victory at the Battle of the Thames, during which the Indian leader Tecumseh was killed, collapsing the Indian confederacy & their support of the British in the War of 1812.  Reported in his own words is the letter from Harrison beginning: "I have the honor to inform you that by the blessing of Providence, the army under my command has this evening obtained a complete victory over the combined Indian &  British forces under the command of general Proctor..." with more, signed in type: Wm. H. Harrison. This is immediately followed by a much lengthier letter signed in type by Harrison concerning the details of the battle, taking over two pages.
There is also much more on the War of 1812 including "Barbarities of the Enemy" "The Friends of the Navy" "War Prospects" and even more.
Sixteen pages, 6 1/4 by 9 3/4 inches, nice condition.
This small size newspaper began in 1811 and was a prime source for national political news of the first half of the 19th century. As noted in Wikipedia, this title: "...(was) one of the most widely-circulated magazines in the United States...Devoted primarily to politics...considered an important source for the history of the period."