Home > Back to Search Results > Thomas Edison to service on Navy board... Fight at Atchi Baba...
Click image to enlarge 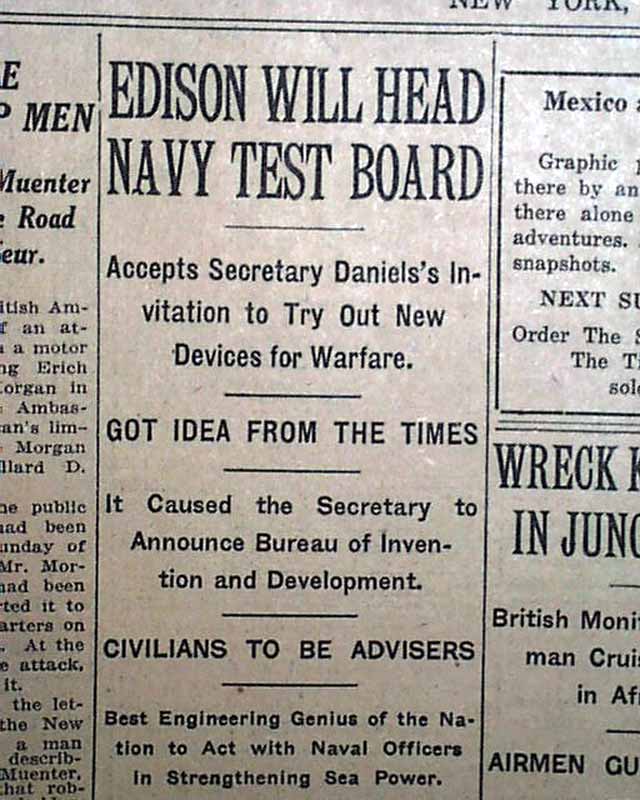 Thomas Edison to service on Navy board... Fight at Atchi Baba...


THE NEW YORK TIMES, July 13, 1915  The front page has a column-wide headline "EDISON WILL HEAD NAVY TEST BOARD" with subheads "Accepts Secretary Daniels's Invitation to Try Out New Devices for Warfare" "Got Idea From the Times" "It Caused the Secretary to Announce Bureau of Invention and Development" and more. "'The United States is far behind in these matters," said Mr. Edison. "I believe it is highly important for a board of civilians, made up of engineers from leading industries, to be formed for the purpose of looking into the feasibility of ideas developed by young men...'"
Page 4 reports "Tells of Thrilling Fight at Atchi Baba" with subheads "Probably 21,000 Turks Fell in the Fiercest Battle Since the Allies Landed" "Deadly Work of Maxims" "French Held Their Fire Till Charging Turks Were 70 Yards Away -- Dead Lay Five Deep." "...In a short space of time the field presented a most appalling spectacle. Soldiers who fought in some of the fiercest fights... say they sickened at the awful sight which lay before their eyes ... Bodies were lying four and five deep upon the ground in all positions. Fallen men lay strewn on the barbed wire entanglements, while many of the enemy's dead still stood erect, propped up against the masses of their stricken comrades...".
Other articles include "Villa Threatens Mexico City Again" and "Flint Says Thaw Shows No Lunacy".
Other news, sports and advertisements of the day are within.
Complete in 20 pages, three binding holes in the left spine, otherwise in good condition. Should be handled with care. 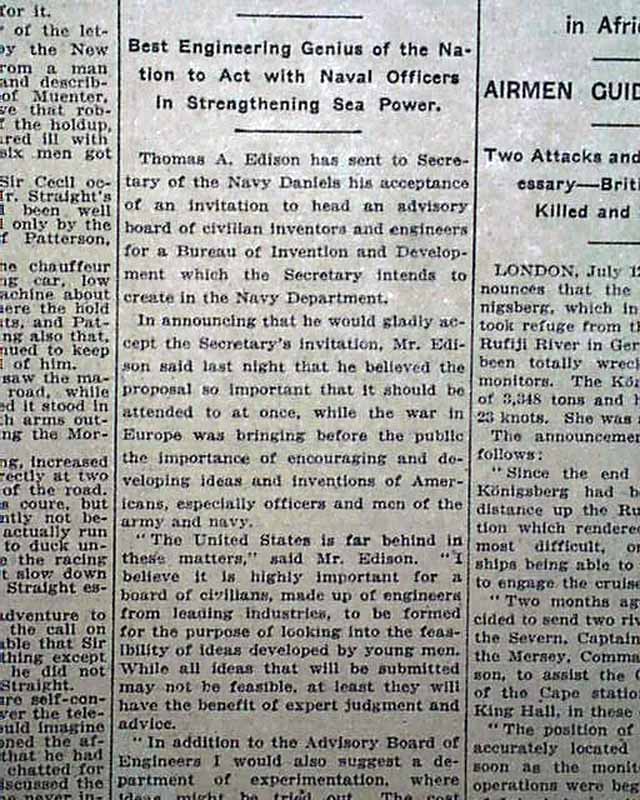 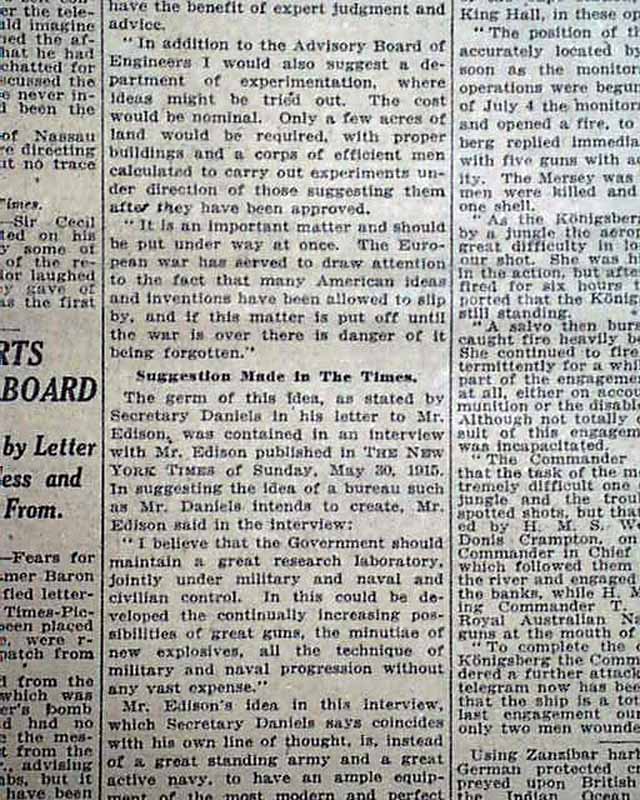 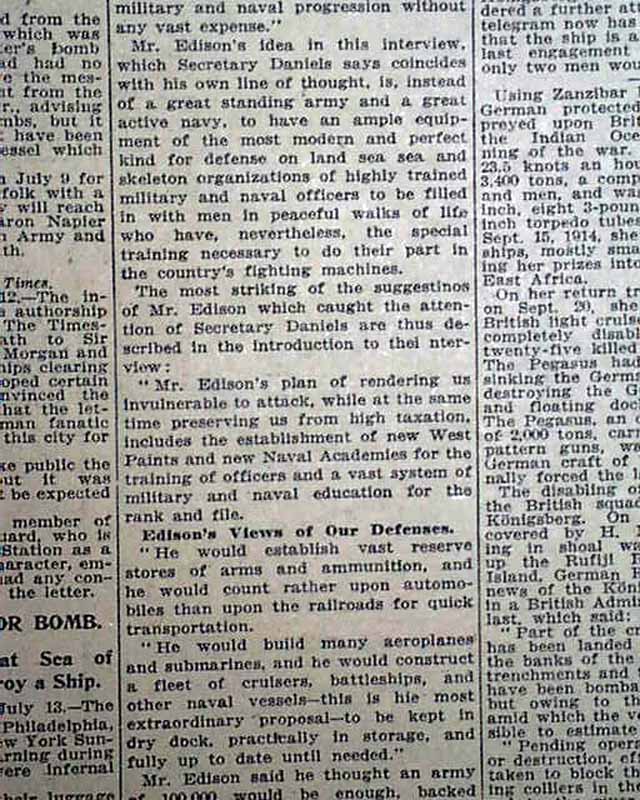 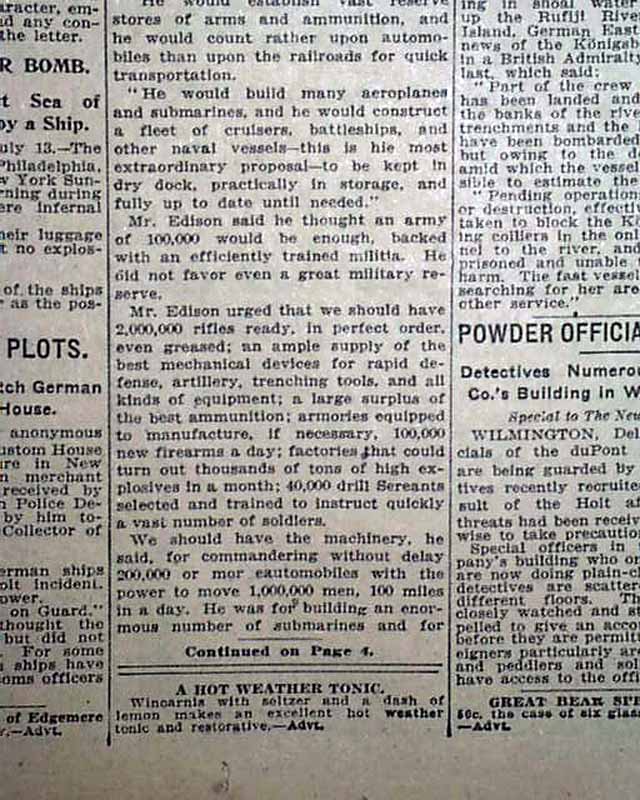 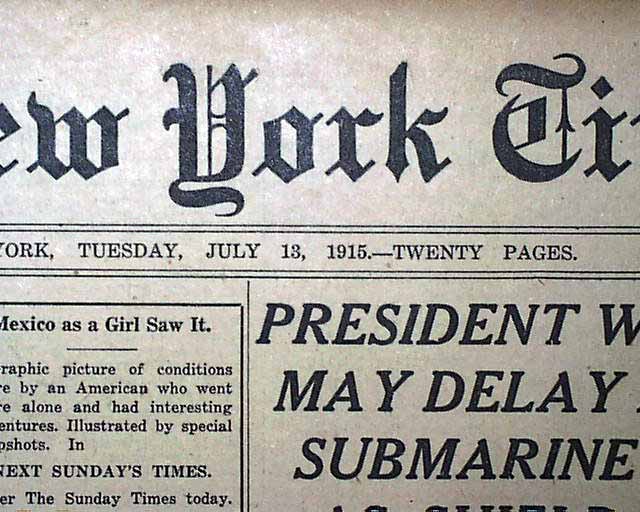 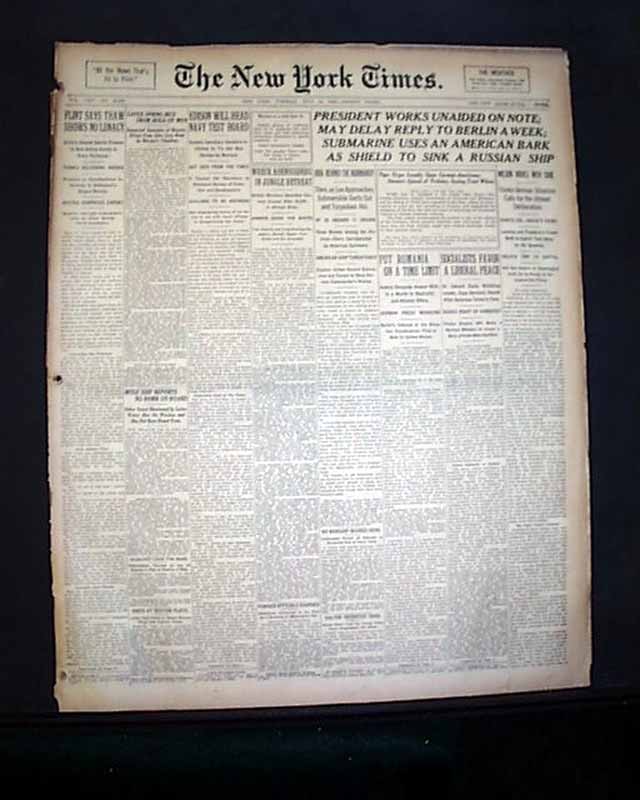 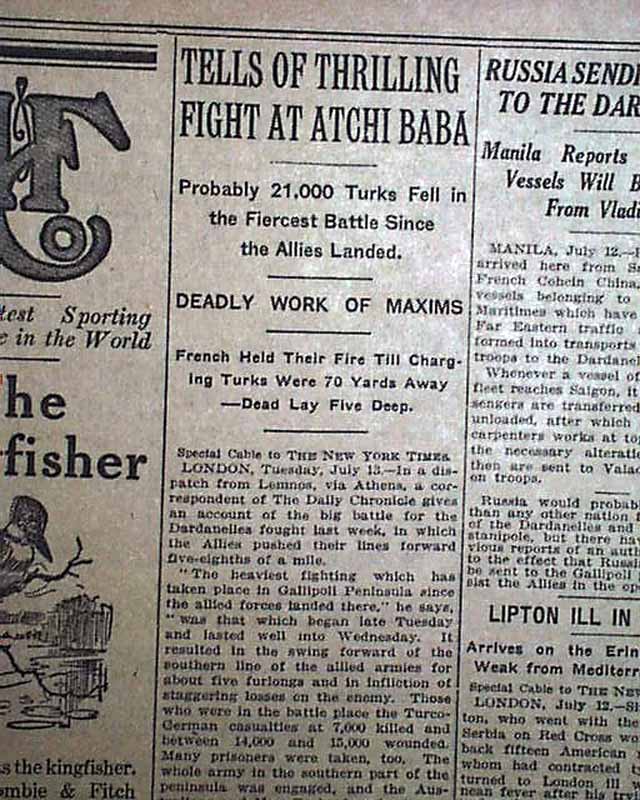 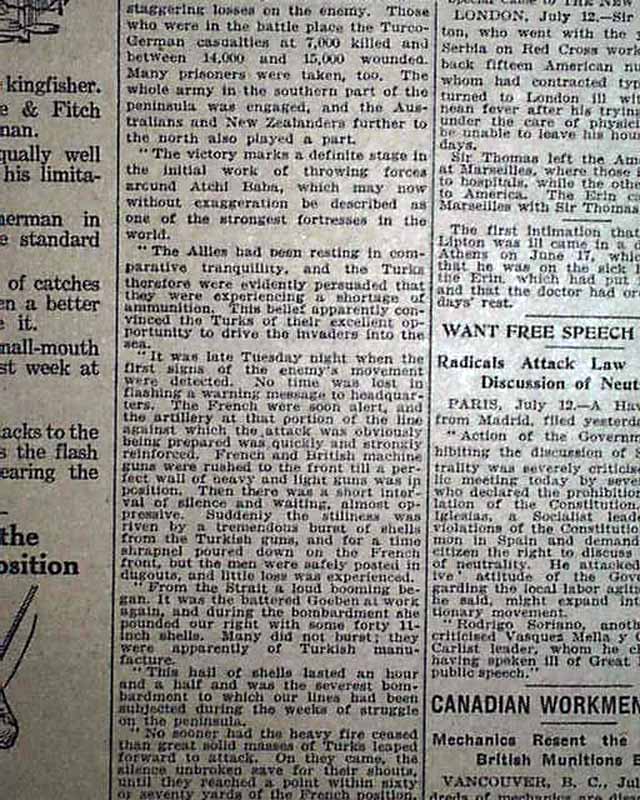 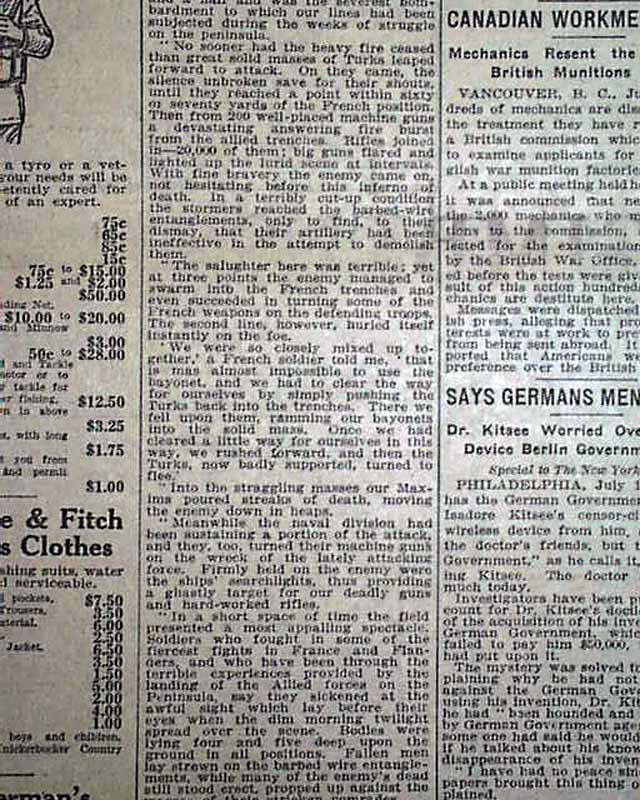 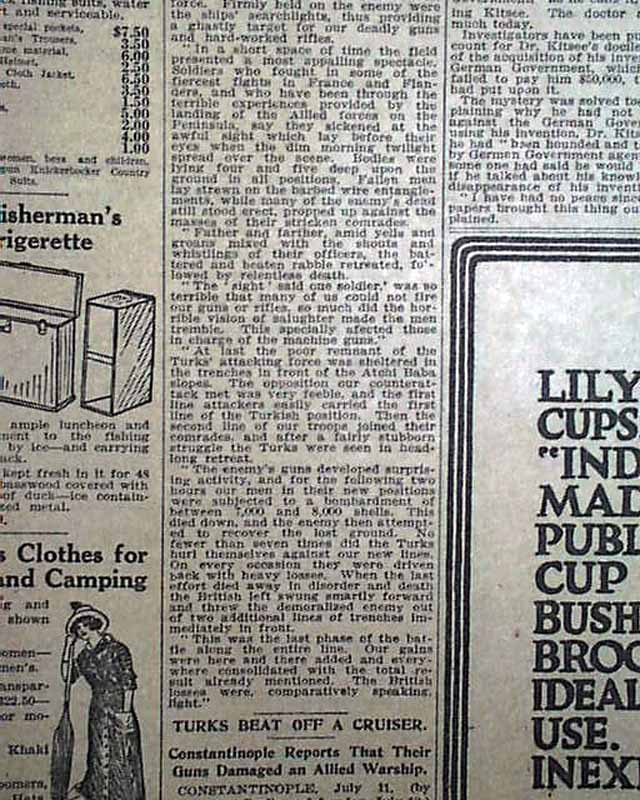 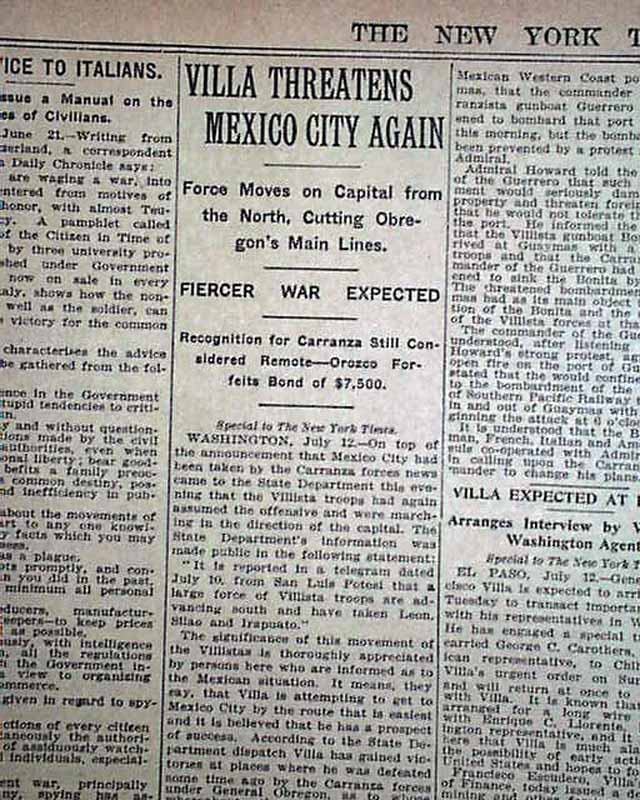 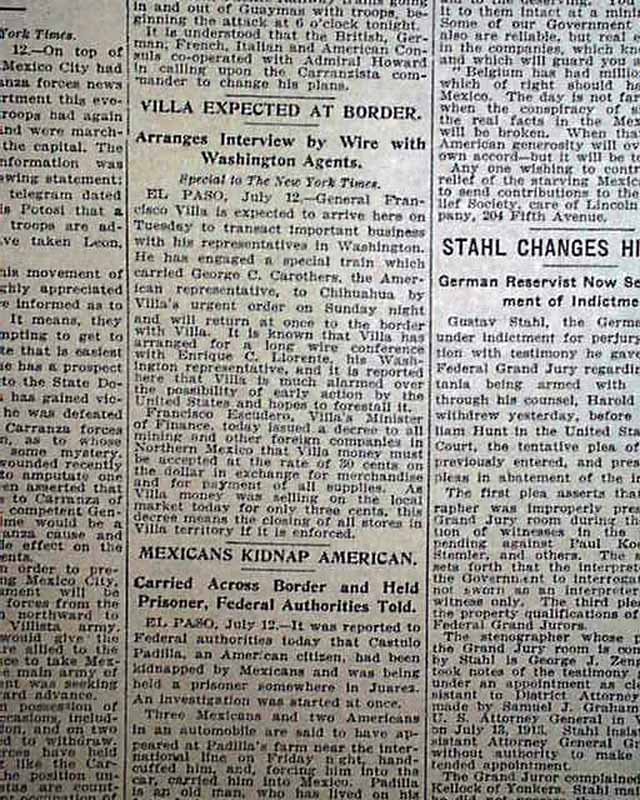 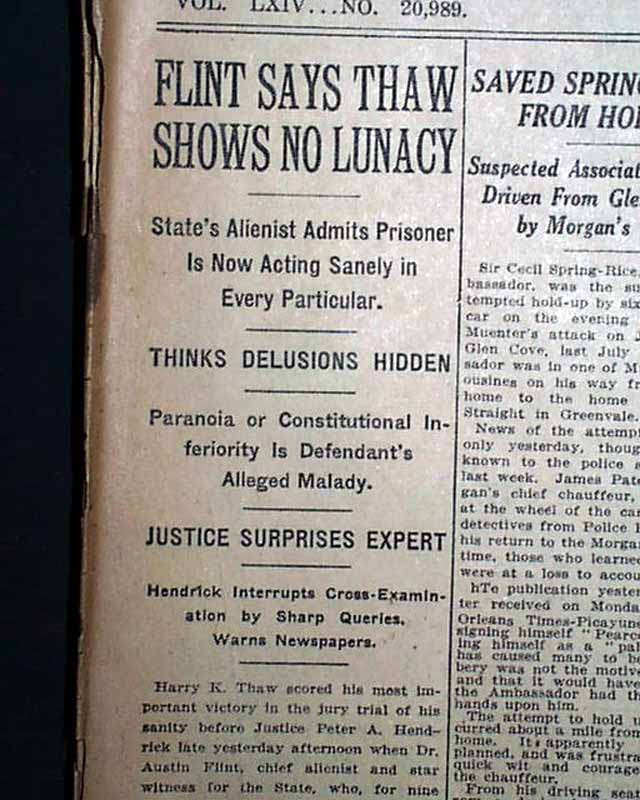 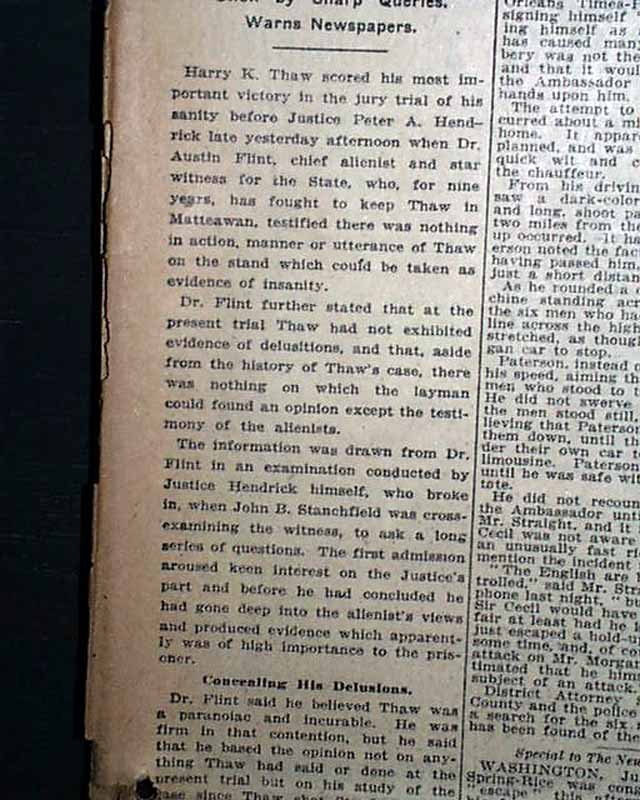