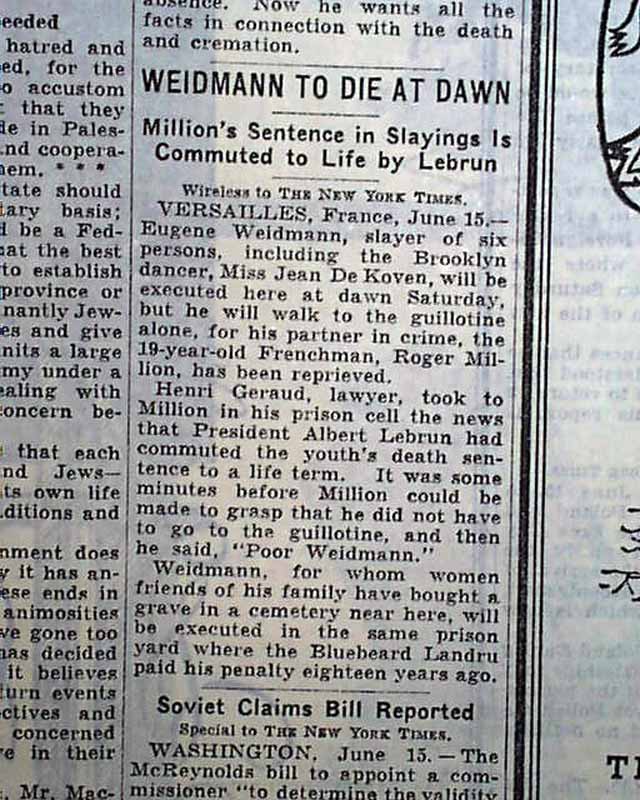 
THE NEW YORK TIMES, New York, June 16, 1939  This newspaper has small, somewhat discrete one column headlines on page 7 "WEIDMANN TO DIE AT DAWN" and "Million's Sentence in Slayings is Commuted to Life by Lebrun". This tells of of the execution of Eugen Weidmann who was the last person to be publicly executed by guillotine in France.
The front page also has "BLACK TOM VERDICT BLAMES GERMANY; FRAUD IS CHARGED", "Justice Roberts, as Umpire, Backs Mixed Claims Body on This and Sabotage Finding", "Embassy Assails Ruling"; "Calls It Invalid Because Reich Member Quite -- $50,000,000 Due in Munitions Blast". This is in regards to the Black Tom and Kingsland disasters in 1916 and 1917 respectively in which these facilities were destroyed to prevent the sales of munitions to the enemies of Germany. This includes the text of the decision.
Other news of the day, sports and advertisements are within.
Complete in 48 pages, nice condition. Rag edition.