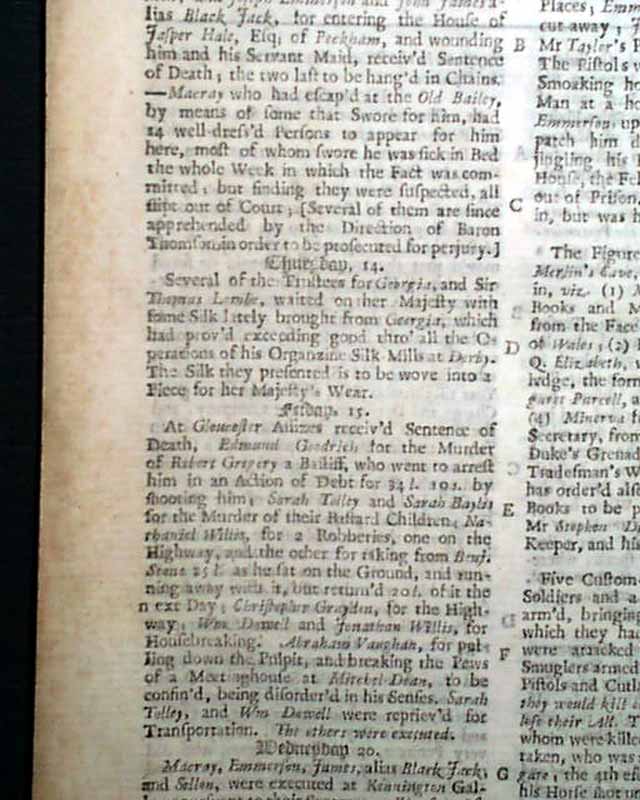 "The Importance of the Parliament's Confidence in the King" "Adding to our Foreign Possessions, not the Interest of the Nation" "Whoever Loses his Passion for Liberty is a Friend to Slavery" "The Ladies Censured for Gaming" & more.

Near the back is a section headed: "Monthly Intelligencer" with news reports from various parts of England & Europe. One of the reports notes:

"Several of the Trustees for Georgia, & Sir Thomas Lombe, waited on her Majesty with some silk lately brought from Georgia, which had prov'd exceeding good..." with a bit more (see photos).
Another item notes: "Letter from Georgia say that the vines and silks of that Colony are in a most prosperous condition, and a settlement of 160 hardy Highlanders from Scotland is to be made on the utmost boundaries for a barrier to that colony." (see)

Complete in 56 pgs. with full title/index page which contains an engraving of St. John's Gate. Measures about 5 by 8 inches, some scattered foxing, generally nice. A period notation near the top of the title pg.

This is from just the fifth year of this magazine's existence & before any maps or plates were included.