Home > Back to Search Results > Jack Johnson in Paris...
Click image to enlarge 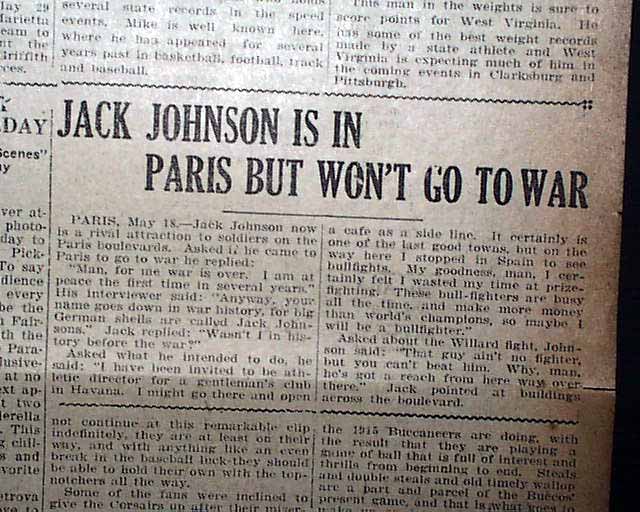 
THE FAIRMONT TIMES, Fairmont, West Virginia, May 19, 1915  On the sports page is "Jack Johnson Is In Paris But Won't Go to War". When asked if he was going to war, he replied "Man, for me war is over. I am at peace the first time in several years... Anyway your name goes down in war history, for big German shells are called Jack Johnsons... wasn't I in history before the war?"
Headlines of the day are "Four Great Battles Being Wages 200 Miles of Eastern Frontier" "General Shaking Up In English Cabinet" and other war coverage as this was shortly after the sinking of the Lusitania.
The front page a photo of "Duval West, the President's Personal Agent in Mexico and Emiliano Zapata", the Mexican Chief.
This is complete in eight pages with a slight irregular left spine and some small edge tears. This should be handled with care.