Home > Back to Search Results > Lincoln as the "imp of Darkness"...
Click image to enlarge 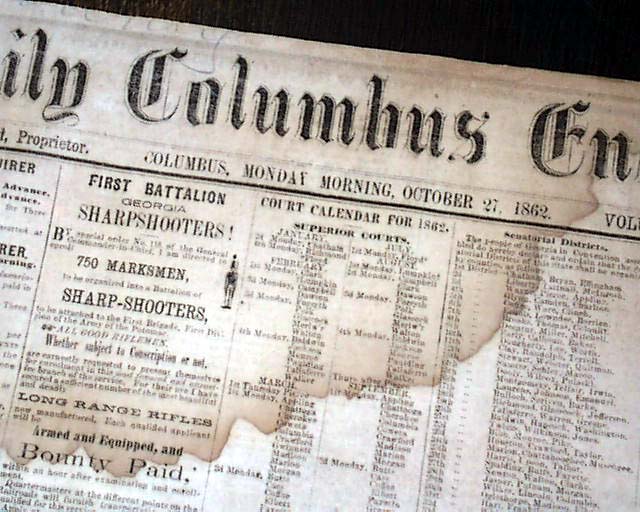 Certainly one of the less common Confederate titles from the Civil War. Columbus is in Southwest Georgia on the Alabama border very near Montgomery.
Page 2 has a fascinating & lengthy article: "Lincoln and His Proclamation" which is full of hatred towards him, including: "I see the Devil has given us a parting kick, via Washington City, by that imp of darkness, Abe Lincoln...expressed the opinion that Lincoln was the most vile and bitter enemy the South ever had Time has proved the correctness of that opinion..." and more, going on to comment concerning the Emancipation Proclamation (see).
Page 2 also has over half a column report headed: "The Battle of Perryville" signed in type by: Braxton Bragg. Other items inside include: "From the Army of the Potomac" "The Armies at Winchester" "A Ram for the American Confederate Government" and more.
Most of the back page is taken up with: "The Constitution of the State of Georgia" ratified July  2, 1861.
Four pages, toned throughout, water stains near the top & bottom do not deter readability, generally good.