Home > Back to Search Results > Virginia in good condition... Shipbuilding in Canada...
Click image to enlarge 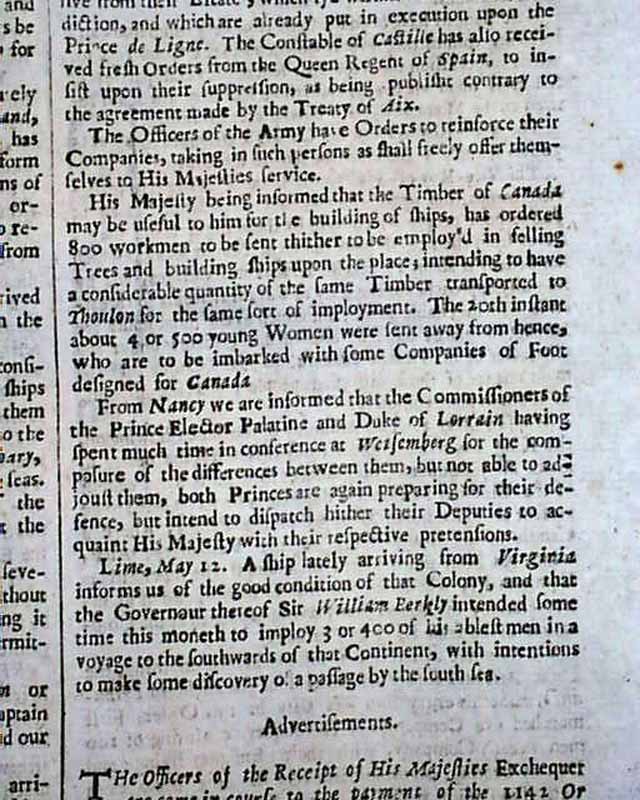 * Among the earliest of English language newspapers

The back page has a very interesting item: "...ship arriving from Virginia informs us of the good condition of that Colony, and that the governour there of Sir William Berkly intended some time this month to imploy 3 or 400 of his ablest men in a voyage to the southwards of that continent, with intentions to make some discovery of a passage by the south sea."
Also a nice item with perhaps the earliest mention of Canada to appear in a newspaper: "His Majesty being informed that the timber of Canada may be useful to him for the building of ships, has ordered 800 workmen to be sent thither to be employ'd in felling trees and building ships upon the place, intending to have a considerable quantity of the same timber transported to Thoulon for the same sort of imployment...about 4 or 500 young women were sent away from hence, who are to be imbarked with some companies of foot designed for Canada."
Complete as a single sheet newspaper, 7 by 11 inches, very nice condition. This is the world's oldest continually published English language newspaper, having begun in 1665 and is still publishing today.