Home > Back to Search Results > Rare issue of the Oxford Gazette... The King to remain in Oxford for the Christmas season...
Click image to enlarge 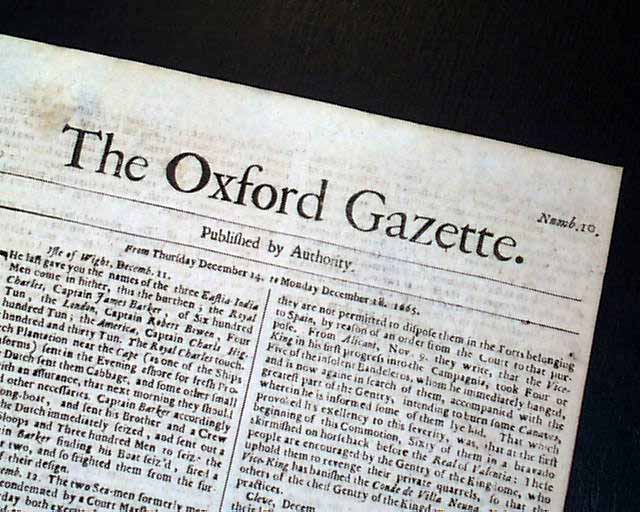 Rare issue of the Oxford Gazette... The King to remain in Oxford for the Christmas season...

This is an extremely famous--and rare--title, being the predecessor of the famous "London Gazette", the oldest continually published English language newspaper in the world. Plus this is the #10 issue.
Because of the Plague at this time, the Royal Court had removed itself from London to Oxford when this newspaper began, so issues #1 thru #23 were published simultaneously in Oxford & London and when the contagion had subsided & the Court returned to London this newspaper went with it and renamed itself "The London Gazette" with issue #24, and the rest is history.
The content is entirely taken up with reports from various parts of Europe, most with a military theme. The bottom of the back page has a notable report concerning the King decided to remain in Oxford a bit longer due to the Plague: "Though we may well believe that the conveniency of His Majesties affaires, as well as his own inclination sufficiently invite his return to London, so soon as possibly the health of that City can permit it; yet to favour the totall abatement of the Sickness there (which by Gods mercy we hope for in few weeks) His Majesty hath declared He will keep His Christmas here with the usuall ceremonies that attend that fesstival, and the beginning of the New Year."
Complete as a single sheet issue, 7 by 11 1/4 inches, some very faint damp staining to the left side, generally in very nice condition.
Certainly a very scarce newspaper and a cornerstone issue for any early newspaper collection, being an early issue of the world's oldest continually published newspaper.