Home > Back to Search Results > The surrender of West Florida to the Spanish...
Click image to enlarge 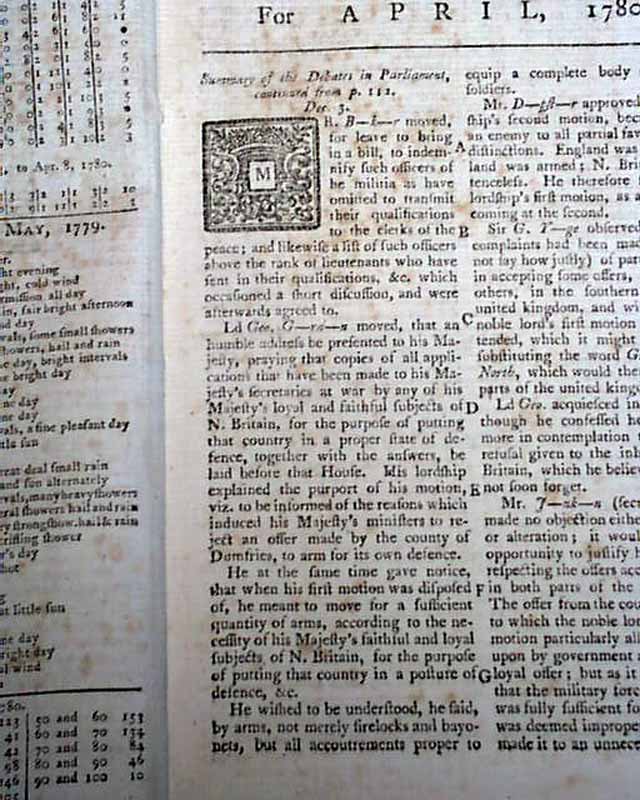 The surrender of West Florida to the Spanish...

* West Florida surrendered to Spanish
* Revolutionary War from the enemy

The issue begins with 5 pages of the "Summary of the Debates in Parliament" which includes some discussion of the American situation, one bit noting: "...could see no difference in point of turpitude between an endeavour to detach France from America and an attempt to recover America from France...remained totally silent respecting America; from whence an inference had been drawn as if the American war was to be abandoned...that if the King's confidential servants had thought it advisable...to have given America independence, the nation needed not now to have had a foreign war to struggle with...if such a measure were this instant to be adopted Great Britain might soon be at peace with all the world. But it was for the dominion over her rebellious subjects that she was contending...that whenever that object shall be deserted, the decline of the British empire will eventually follow..." (see).
Another article has: "The Legislature of the Colonies Discussed" which talks of the entire British empire, with some mention of the American colonies.
Near the back in the "Historical Chronicle" is an item noting: "Was published in the London Gazette Major General Campbell's account of the surrender of West Florida to the Spaniards...the whole force of the province of Louisiana being previously collected, the independency of America was publickly recognized by beat of drum at New Orleans on the 19th...the governor, Don Beraud de Galvez, immediately marched against our forces on the Mississippi & effectually succeeded by the capture, by stratagem, of a king's sloop in Lake Pontchartrain by the seize of a schooner in the River Mississippi..." with much more related text, taking most of a page (see).
Lacking the plates called for.
Complete in 48 pages, measures 5 by 8 inches with a full title/contents page featuring an engraving of St. John's Gate, nice condition.
A very nice Revolutionary War era magazine from the "mother country" with a wide range of varied content including news of the day, political reports, literary items, and other unusual tidbits. This was the first periodical to use the word "magazine" in its title, having begun in 1731 and lasting until 1907.

Cornwallis surrenders at Yorktown: a ...