Home > Back to Search Results > No new taxes for America, & some to be removed...
Click image to enlarge 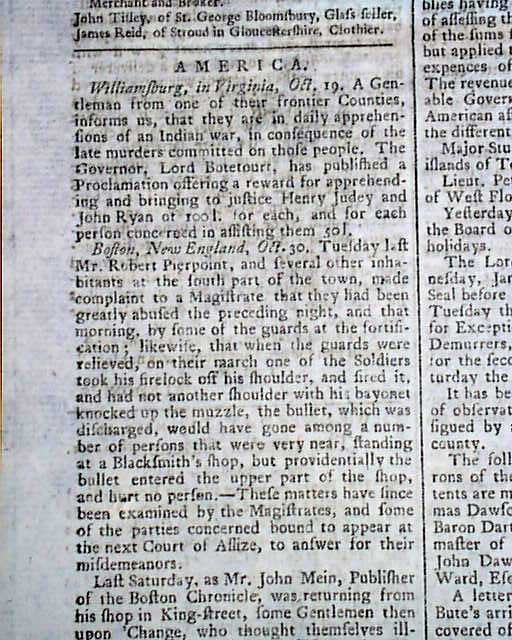 No new taxes for America, & some to be removed...

Page 2 has a report from Williamsburg, Virginia, headed "America" which notes: "...informs us that they are in daily apprehension of an Indian war in consequence of the late murders committed on those people..." with a bit more. Also a report from Boston which includes a report of the publisher of the 'Boston Chronicle' being ill-treated by men who Mein reported unkindly about in his newspaper.
Also a report from London notes: "...the plan for restoring the tranquility of the Colonies will consist chiefly in fixing the quota of the different provinces...the respective Assemblies having the choice of the easiest methods of assessing the people by internal taxes. None of the sums so raised to be remitted to Britain but applied to the purposes of supporting the expences of government in North America...".
Page 6 has a letter from Virginia which includes: "...I have been assured by the Earl of Hillsborough that his Majesty's present administration have at no time entertained a design to propose to Parliament to lay any further taxes upon America for the purpose of raising a revenue...to propose...to take off the duties upon glass, paper, and colours...".
Eight pages, 8 by 11 1/4 inches, very nice condition.