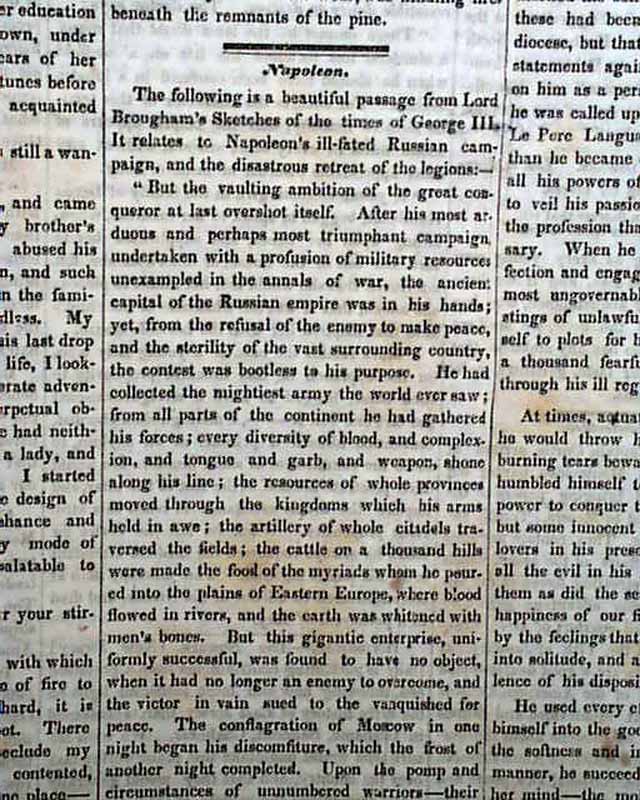 
SATURDAY EVENING POST, Philadelphia, Pennsylvania, April 4, 1840  The front page of the issue has a report "Napoleon". "...It relates to Napoleon's ill-fate Russian campaign, and the disastrous retreat of the legions: 'But the vaulting ambition of the great conqueror at last overshot itself...the ancient capital of Russian empire was in his hands; yet, from the refusal of the enemy to make peace, and the sterility of the vast surrounding country, and the contest was bootless to his purpose. He had collected the mightiest army the world ever saw:...All his subsequent efforts to regain the power he had lost, never succeeded in countervailing the effects of that Russian night... In two campaigns, his efforts were more than human... But all was in vain...".
On page 3 is an article "Great Fire -- Louisville (KY.) in Flames!" which was reporting on an extensive fire which burned to the ground "...one whole block of buildings in the most business part of the city..." .
The back page also has an article on Robert Burns, the Scottish poet. He may be more known to most for writing the words to Auld Lang Syne.
This is complete in four pages with lite scattered foxing throughout, otherwise is in good condition.