Home > Back to Search Results > Samuel Bowles&#x27; "Across The Continent"...
Click image to enlarge 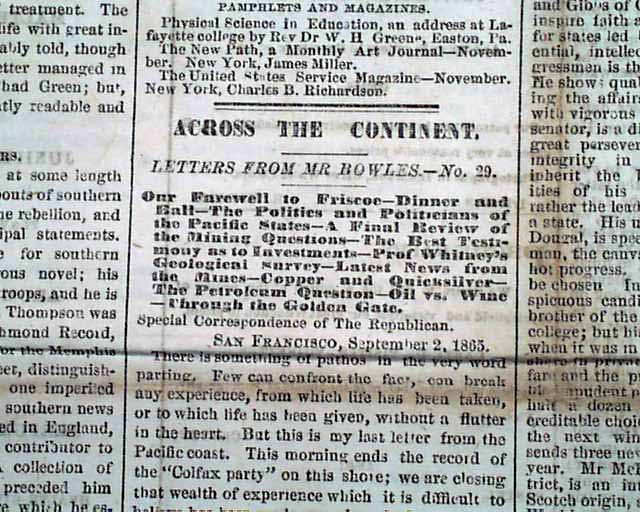 Over half of the front page is taken up with a portion of the Samuel Bowles book: "ACROSS THE CONTINENT" "Letters From Mr. Bowles--No. 29" "Our Farewell to Frisco--Dinner & Ball...A final Review of the Mining Questions...Latest News from the Mines--Copper and Quicksilver--The Petroleum Questions--Oil vs. Wine--Through the Golden Gate". Fascinating reading from just after the end of the Civil War.
Samuel Bowles was the publisher of this newspaper so this may be the only newspaper in which this serialized work appeared. It would ultimately be published as a book titled "Across the Continent" and he would later publish another: "The Switzerland of America" (see hyperlink for more on him).
Also on the front page is: "Petroleum In California".
Eight pages, some foxing at folds, very nice condition.